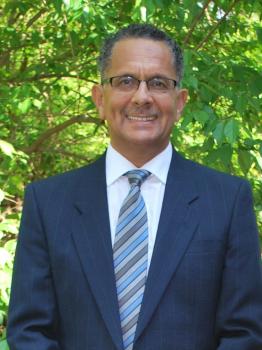 Dr. Alan Jansen, resident director of Arcadia’s South Africa Center in Cape Town, is retiring at the end of the fall 2019 semester after nearly 10 years with the University. As resident director, Dr. Jansen oversees the center and works with colleges and universities worldwide to develop faculty-led field studies. Additionally, he teaches an introductory course in South African history and culture.

Dr. Jansen started at the center in January 2010 after leading his own consultancy firm, which worked with businesses and nonprofits in South Africa to improve diversity among employees. Previously, he served as president of Cornerstone College in Cape Town for 15 years.

Here, Dr. Jansen shares highlights of his career and talks about how his personal experiences during South Africa’s recent history of apartheid have impacted his teaching.

Q: How would you describe your time as resident director in South Africa?

A: I came into the position with a background of being with students for almost twenty years, but in a senior administrative role with some teaching responsibilities. I had worked with international students before. I’d left academics and came back in 2010 to work for The College of Global Studies. It certainly was quite a different take on what I’d been doing for the previous decade or so.

You take the highs and you take the lows, but largely what I enjoy is the South African way of life. It’s people, it’s cultures, it’s languages—it’s also the challenges we face. I suppose for me, that’s really been one passion that I lived—sharing my story and the South African story. That’s what I get to do every semester with a new bunch of students, and that’s fantastic.

Q: What is your favorite thing about engaging with students?

A: I think it’s engaging with someone who is an average age of 20 years old, and who has thought a little bit about Black Lives Matter and other movements around gender issues and inclusivity. They’re beginning to think about that and those issues, but in a very limited way; to challenge them to think more deeply and, hopefully, more broadly about the issues of the U.S., as well as their responsibility, their contribution, in this very challenging time we live in—be it the climate, be it gender-based violence, be it issues of inclusivity. To be a vehicle, a conduit, that helps them begin to see things differently and to play a role in shaping their worldview, is the best part of this position and my absolute favorite.

Q: What impact do you think study abroad makes?

A:  I think the study abroad platform around the world, be it going to India, China, Bolivia, wherever, presents them with opportunities. Hopefully, whoever is out there on the ground in terms of local people, local storytellers, local faculty—they’re part of that opportunity that’s offered to students as they travel to various places. The opportunities to learn, to engage, to deepen their worldview to broaden their worldviews, is a choice. I’ve seen students come through and it’s been a complete breeze and untouched by anything on the ground, no engagement, no contribution. And so does study abroad play a role in broadening their worldview? It absolutely is a great vehicle—provided the student is able to cross that opportunity and make the choice to use their semester abroad to engage, to learn, to be a student of the world and not just of the subjects that they take in classes.

Q: What have been some of the highlights for you over this past decade?

A: The fact that I’ve been privileged to teach. I teach the core class, which all students have to take no matter their major or discipline, and that affords me the opportunity to share my story and the story of the country’s political history, as well as its cultural nuances. It also gives them the tools to understand their journey over the five months, because I become a resource in terms of a lot of their engagement. So you know, “Dr. Jansen, we were an hour out of Cape Town and we encountered this particular situation or that group of people; how do we unpack that? How do we understand them?” The privilege of teaching them is probably number one.

Secondly, taking them on field trips which are related to my class. One of my favorite places is an indigenous cultural village up the west coast of Cape Town, which happens to be a place where my ancestors are from way back. To be able to share that with them, because it becomes part of my ancestral story, that has to be up there as one of the favorite things I do with them.

Q: Is there a part of your class in particular that you enjoy teaching?

A: We focus primarily on the political history, but of course we go through aspects of culture and language, as well. For me, it’s probably colonialism [that I enjoy teaching most], and its impact on indigenous communities. I think American students can resonate with that; even if they’re not fully aware of it, they kind of know the superficial story of American history: colonialism and its impact on indigenous communities. Those are the kinds of topics we unpack. Related to that, the issue of land. If you ask the students what is my favorite topic, they would say land. But for me it’s land, colonialism, and the impact on what I call the “great land grab.” That is personal for me. I come from a family that has been uprooted many, many times. There was an ongoing threat of losing homes and losing land, and I saw it firsthand growing up. We had to move many times because of government laws that prohibited us from living in certain neighborhoods. It’s also my roots in the indigenous communities here in the Cape who were displaced, who lost all their land. So, it’s my story that I get the opportunity to share with the students.

Q: How do your students react when you talk about your personal story?

A: I think the part that they really love are the stories of my struggle and my family’s struggle, my own political struggle, and my activism and times in jail. They’ll say, “Tell us more!” I think the fact that I’ve lived the politics of our time has probably been, in some ways, for them the biggest connection with me, because it’s more than a textbook. I am part of that living history of oppression and discrimination.

Even though they’ve heard and read about the civil rights movement, not too many of them have seen and met someone who’s been through that kind of political activism and stance. They ask, “When are you going to write the book, Dr. Jansen?” It’s been a joy sharing my story, which happens to be the story of South Africa’s political upheavals. The great story for me is to tell them about is the first time I voted as a 42-year-old person. It was indescribable—the word joy doesn’t even fit. The deep sense of “We did it.” I never expected it to happen in my lifetime. I never expected that even in my kids’ lifetime. It’s that sense of complete gratitude that we managed to see political change in this country. I share that with them. Because they are voting adults now, they find it hard to believe that someone at 42 voted for the first time in their lives.

Q: What is the next part of your story?

A: The next part of my story is about legacy. I’m 65, and I have an immense amount of energy and passion, and a sense of contribution. It’s about contribution, and a lot of my time will be about people who come from extremely impoverished backgrounds, who have no facilities, and who are often set up for absolute failure in higher education. [I want] to give them a greater platform of transition from the schools they come from to the great big leap into the university spaces, so that they succeed.

I have also been working with unemployed youth who’ve dropped out of school at grade 10 or 11. We have the highest dropout rate in grade 11 in the world, so students are aimless, helpless, and hopeless. I’ve been involved with trying to find a bridge for unemployed and underskilled youth to access the workplace. That’s part of the legacy of my late son, who gave up his high-end professional financial career to serve the poor. It’s going to be another significant thing that I do going forward.

We also have a charity that we founded for my late daughter [Ari’s Cancer Foundation]. We unfortunately have a sad history; we lost two of our children. Our youngest daughter died of brain cancer, and we started a foundation. My wife and I, along with some volunteers, are quite busy in that as well.

It's going to be a busy time, but I hopefully will get time to visit my grandkids who live all the way across the world in San Francisco.

Q: And you're going to write that book, right?

A: I'll have to be sitting in the corner of the garden at my daughter's place, where there’s quiet and peace to write that book. The students might finally get their way.

Click here to view the original article. The College of Global Studies currently has 2 programs available in South Africa: University of Cape Town and University of the Western Cape.