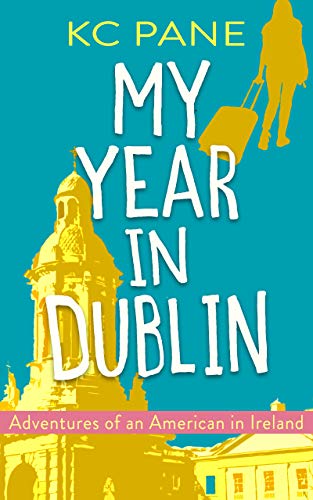 So many times when important things happen to us in our lives we wonder if there should be a soundtrack behind it, if we’re secretly being filmed or if, someday, the events will end up memorialized by us in our memoirs.

In the case of 2010 academic year Trinity College Dublin program student KC Pane, two out of three came true (although she did also attend a Harry Potter film premiere in London, so perhaps it was all three). She often walked to class serenaded by a piano (sometimes pushed outdoors for blocks by its musician), which she came to think of as a soundtrack for her time abroad – and years later, she has written a delightful memoir of her study abroad experience, My Year in Dublin: Adventures of an American in Ireland (ASIN B0895KG57D, 2020, available through Amazon for Kindle/ebook and in paperback).

The narrative of the book juxtaposes curated blog posts from the vault with current postscript impressions, creating a very satisfying mix of being in the moment and discovering what happened “in the end.” (Your reviewer is one of those irksome people who reads the first page of a book, then the last page, then the middle – but since this memoir was structured in such an innovative way that, in this volume, I didn’t need to do so.) From joining the debate team to hosting her family on a visit to kissing the Blarney Stone to exploring the most difficult passages of Joyce’s Ulysses, KC had both a quintessential experience and one that was uniquely her own.

Arcadia Abroad recently caught up with KC Pane to see how things were, how things are, and what she took away from her entire experience.

AA: Based on your experience, what is your best advice for a student studying abroad?

KCP: My best advice is to make the effort to get involved on campus. I deleted my social media accounts from home and joined clubs, which minimized distraction and the potential for homesickness. I met loads of people who became lifelong friends in my debate societies.

KCP: Studying was entirely self-directed, as there weren’t progress checks or assignments between lessons. After we did the readings, we attended lectures and held small review groups with tutors. No one seemed to take it too seriously until exams and essays were upon us. When exams hit, the huge shift from pubs to full days at the library created quite a lot of anxiety. Luckily, I learned some useful studying skills.

KCP: Navigating pub culture and social dynamics created challenges, but I was surprised at how quickly I fell into the rhythm of it all. There were small hurdles that felt much more troublesome at the time than they do in retrospect. When furnishing my apartment, there was no one-stop solution for the things I needed to buy. I had to wander around to loads of small shops to collect everything, like I was on a massive scavenger hunt. When I got a hankering for Mexican food, my mom had to send me taco seasoning in the mail. Clothes dryers aren’t common there, so I really missed fluffy bath towels!

KCP: Arcadia was brilliant. The outings they organized for us around Ireland, especially the homestay before courses started, stuck with me. I'll never forget attending my first rugby match. They created a warm reception to the country, and they were responsive to every concern I had while there.

AA: How do you feel your view of the world was changed by study abroad, and how does your having undertaken the experience influence or affect your life today?

KCP: Studying abroad was, without a doubt, the best thing I ever did while at university. Everything that was strange and new became familiar, increasing my understanding of different cultures. Those little differences in everyday life made me cognizant of the underlying universality of the human condition, which had previously never concerned me. It took me leaving to an island the size of Maine to realize the world really is quite small.