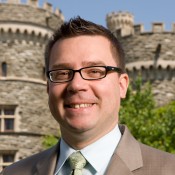 IF YOU ARE CONTACTING US ABOUT AN URGENT ISSUE, PLEASE CALL AT THE NUMBERS LISTED ON OUR EMERGENCY PROCEDURES PAGE. STUDENTS IN-COUNTRY SHOULD CALL THE ON-SITE STAFF ON THE ARCADIA 24/7 PHONE NUMBER PROVIDED TO THEM. EMAIL ACCOUNTS ARE NOT MONITORED 24/7.

Tim joined Arcadia University in 2002 after spending time in Ireland while working on his Master’s degree and having the opportunity to work as a Parliamentary Assistant in the Dáil Éireann for the former Irish Taoiseach (Prime Minister) John Bruton. At Arcadia, Tim has supported students and schools for just about every country we have had programs, eventually serving as Director of Student Service. In this role, he led his team and its work to reimagine both the admissions and predeparture processes, allowing the team to better engage with students. Next he was appointed Director of Student Life and Academic Operations where he again worked to rethink Arcadia’s approach to support services and engagement programming. Throughout his time in both of these roles, Tim played an important role in Arcadia Abroad’s Health and Safety team and acted in an on-call role for students and parents for 11 years.  In 2019, Tim was appointed Launch Director for Arcadia’s first domestic study away program, Intern Philly. That role has now expanded to his newest role of Director of Applied Learning and North American Programs. Tim received the Martha Washington Award in 2012, Arcadia University’s highest recognition for a member of staff.