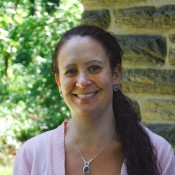 Rose Koch has served in various capacities at Arcadia since 1989. She joined the Arcadia staff as a receptionist the summer before her junior year abroad, continued working in the office after her return, then graduated from Arcadia in 1991 with a BA magna cum laude in English and Spanish. Rose also obtained her MFA in Poetry from Arcadia in 2013. Her overseas experience focused upon studies in English literature and creative writing at Lancaster University in northern England. Rose returned to Arcadia full-time in 1992 as Assistant to the Deputy Director, and later held the position of Publications Coordinator, responsible for print materials production, advertising and website design through 2000. During the break in her tenure, Rose worked in the field of web design for various nonprofit organizations and taught primary school. Returning to Arcadia in 2007, Rose served as Web Content Writer, Web Manager, and Assistant Director of Marketing, positions held through 2011. From 2011-2013, Rose assisted the Director of Strategic Development, providing administrative and technical support for custom programming initiatives, and she served as Executive Assistant to the Vice President through September 2015. Since 2015, Rose has held two roles on the Academic and Student Affairs team - Academic Affairs Manager and her current role of Academic Records and Systems Manager.