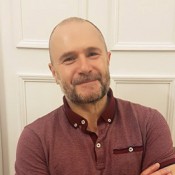 Richard Maguire received his doctorate from King’s College London.  His thesis was entitled ‘The Last of the Queer Romantics: Mourning and Melancholia in Gay Men’s Autobiography’. Concentrating on unresolved grief from the AIDS crisis in the West at the end of the twentieth-century, and the theoretical loss of the self that some poststructuralist thought espouses, he examined autobiography in different forms: the poetry of Mark Doty, the films of Derek Jarman, the performances of Franko B, and the artwork of David Wojnarowicz. His teaching primarily focuses on sexuality, feminism and queer theory in nineteenth and twentieth century literature. He is especially interested in autobiography, and the construction of the self through art. He also taught American Fiction and fin de siècle literature at King’s College. In 2017 he curated an evening of talk, poetry and films at The Lux, a gallery/archive for experimental film.