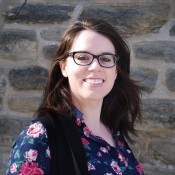 Mary joined The College of Global Studies in November 2011 with a background as an editorial assistant for a regional newspaper. She worked on the Student Services team as an Operations Coordinator for four years before she became a Program Manager. She earned an MFA in Creative Writing from Arcadia University and a BA in Journalism and Spanish from Temple University.

Mary's Irish grandparents emigrated to the United States in the mid-20th century. While she considers the western coast of County Donegal her "home away from home," she chose to study for a semester each in Rome, Italy and Oviedo, Spain. When she returned to Philadelphia, she assisted students as a peer advisor in Temple University’s Education Abroad office. As a graduate student, she participated in a creative writing residency at the Arcadia Edinburgh Center in Scotland.

When not working, Mary volunteers as a mentor with Big Brothers Big Sisters of Bucks County, serves as a trustee for her township library board, and writes. Her short fiction has appeared in various literary publications.