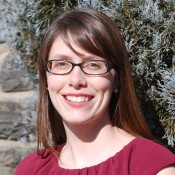 Jacki has been at The College of Global Studies since April 2008. While attending Dickinson College, she studied abroad at the University of East Anglia in Norwich, UK for an academic year. After graduation, she worked at American University in Washington D.C. where she pursued her interest in study abroad further by earning an MA in International Training and Education.

As a Program Manager Jacki worked with applications, advised on academics, housing and visas, and prepared students for their time abroad. In March 2013, she joined the London Center as Assistant Director of First Year Programmes. In this role, Jacki was responsible for the student services and academics for Arcadia's first year programming in the UK. Currently, as Assistant Director of Custom Programs, Jacki manages the Custom Program Team and supports all custom programs in Great Britain and Ireland.