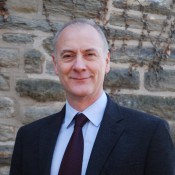 Send a Message to Andrew George

Andrew was born and bred in the south of England and has lived in London for more than 30 years. Andrew joined Arcadia in 2016 but has a secret previous history with us as he first worked as a Residence Life Assistant with Arcadia in 1985. He then worked in the London Center in both the student life and academic areas. Before re-joining Arcadia, Andrew led the Study Abroad program and established the International Partnerships Office at Queen Mary University of London. Andrew has an extensive knowledge of both the UK and global higher education environments with a particular focus on the US Study Abroad sector. The transformative possibilities of global education are what gets him out of bed and into the London Center every morning – except for weekends when he can be found digging and planting in his vegetable garden or following his (currently underperforming) football team, Portsmouth. Andrew studied English and Psychology for his first degree at Keele University and has also earned a Masters in Film Studies from Queen Mary and a Post Graduate Certificate in Education from London South Bank University.