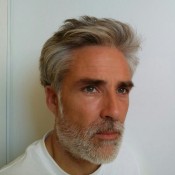 Xavier Alcón was born in Barcelona and earned his degree in Contemporary Philosophy and Cultural Anthropology from the Universitat de Barcelona. He lived in London and Paris before working for Olympic Television (RTO) during the 1992 Olympic Games in Barcelona.

He moved to Italy in 1993 to teach Spanish Language and Culture at theUniversità degli Study di Milano, Università Bocconi in Milano and Instituto Cervantes sharing his teaching activities with the post of correspondent for culture and cinema in Italy for the Latin American magazine Magazine Literario.

Soon after, he took responsibility, under UNESCO patronage, for the Latin American Human Rights Forum in Milano and Rome (1995). In the same period he completed his MA at the Universidad de Alcalá de Henares in Madrid in Spanish Language and Cultural Studies.

In 2002, he returned to Spain to teach Spanish Cultural Studies at Pompeu Fabra University. In 2003, he entered the field of Media, Communication and Semiotics, teaching at IED Istituto Europeo Design of Barcelona in the Design, Media and Communication programes. In 2010 he became responsible for Major Project Research for the BA Honours the Westminster University. Since then he has been lecturing with study abroad students from all over the world. In 2008, he pursued an MA in Advanced Media and Communication at Ramon Llull University in Barcelona. Xavier combines his teaching activities with art direction and concept design in Fashion, Art and Cinema in the Caixa Forum Art Museum, Bread & Butter Street Wear Fair and the Centre d’Art Santa Monica in Barcelona.