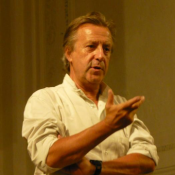 Vito Zagarrio is full  professor of Cinema and Television at the University of Rome Tre. He got a MA and a  Ph.D in Cinema Studies at NYU. He wrote and edited several books on both American and Italian Film. Among others, volumes on Francis Ford Coppola and Frank Capra.

As a filmmaker, he directed many documentaries, tv programs and three feature film.. One  documentary on John Waters (Divine Waters) was distributed in the US by New Line Cinema.

His last feature film, Le seduzioni, is in postproduction.

He is also the artistic director of a couple of Italian film festivals (in Rome and Sicily).