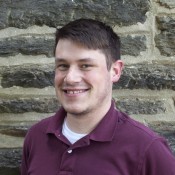 Stephen is a graduate of Arcadia University. He received a B.A. in History with a minor in International Studies in 2012. While at Arcadia, he studied abroad in London as a part of the First Year Study Abroad Experience and in Ireland at University College Dublin during his junior year.

Stephen began his career as an office assistant at The College of Global Studies in 2012 while completing his undergraduate degree. After graduation, Stephen served as an Apprentice for the Institutional Relations team, before joining the Marketing department in March 2013. He has served as a Marketing Assistant, Social Media Coordinator, and Digital Content Administrator at various points since. In his current role as Digital Content Administrator, he manages The College's image, voice, and presence on the website and in various other digital capacities.