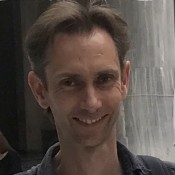 Robin Wilson completed a PhD at the Bartlett School of Architecture in 2006. He is a London-based critic and curator of art and architecture, and is a lecturer in the history and theory of architecture at the Bartlett School of Architecture, UCL. He is co founder of the art practice Photolanguge (Nigel Green & Robin Wilson). As a critic and theorist he has published widely in professional and academic journals, such as Architectural Design, The Architects’ Journal, Blueprint, The Journal of Architecture and Architecture Theory Review. His recent exhibition projects include ‘Land Use Poetics’ in the Museum of the Sketch in Lund, Sweden, ‘Dark Season Botany’ at The Museum of Garden History, London and ‘East Sussex Modern’ in Hastings, Southern England.

Robin has recently published the book Image, Text, Architecture: The Utopics of the Architectural Media (Routledge, 2015). With Nigel Green he has also published a map of Brutalist Architecture in Paris (Bluecrow Media, 2017).