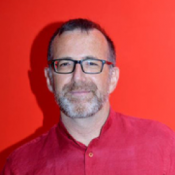 Raffaele Furno (PhD, Performance Studies, Northwestern University) serves as faculty in Cultural Studies and Communication at Arcadia University Rome Campus since 2011. In 2015, he served as Visiting Scholar in the Drama Department, National Taiwan University. He has given lectures on commedia dell’arte and Italian experimental theatre in various European countries, USA, China, South Africa, and the UK. He is founding member of the International Network of Italian Theatre, served as reviewer for The Theatre Times and The Arts Journal, and is an active member of the International Federation of Theatre Research, and of Performance Studies International. His first book appeared in 2010 and is titled Intra-cultural Theatre: Performing the Life of Black Migrants to Italy. He has published several articles in journals and edited books on the relation between theatre, society and politics in Italy.

Furno is also a theatre director and actor, founder of the company Imprevisti e Probabilità. In the last fifteen years, he collaborated with the Goodman Theatre and the Chicago Shakespeare Company in the US, with Teatro delle Albe and Societas Raffaello Sanzio in Italy. He has been awarded several prizes as best director at Premio Mecenate - Rome, Premio Augusteo - Napoli, Premio Allocca – Portici, Festival Aenaria – Ischia, Premio Guglia d’Oro – Ancona, Premio Musco - Milo, among others. His poetic is a mix of visually compelling story-telling and the adaptation of tradition and classics in contemporary style. As an actor and director he worked in Italy, USA, Senegal, Republic of Macedonia, Austria, France, Switzerland, Germany and Taiwan.