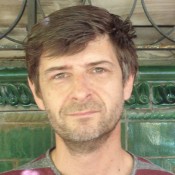 Oliver Sutton has been living and working in Barcelona since 1999 when he came to train as an English teacher and never left. In the 2000’s he was awarded a Masters in Globalisation, Cooperation and Development from the University of Barcelona, which added to the MPhil in philosophy that he gained from the Manchester Metropolitan University in the 1990’s. Since then he has developed a range of academic and research interests which take as their point of departure the dynamics of globalisation as they play out across the economic, cultural and social fields. Two main areas have emerged from this focus; the role of cities within the shifting global order paying special attention to the effect on the lives of ordinary citizens, and migration, immigration and the effect of these on identity, with particular emphasis on the cases of Spain and the United States. He started teaching in the area of Study Abroad in 2010 and since then has published articles related to the branding of cities in journals and magazines from various different countries.