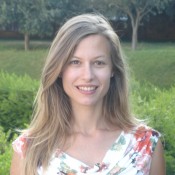 Myrto Malamou has studied Classics (BA and MA) at the University of Athens and her ongoing Ph.D thesis focuses on the Oratory in the Second Sophistic. Her research interests vary from Latin love elegy and epic to the Rhetoric of the Late Antiquity as well as ancient Greek novels and the reception of ancient literature in modern poetry. Since 2006 she has been teaching Greek language (ancient and modern) and Latin at State High Schools. Since 2011 she has been teaching Ancient Languages at the Arcadia Athens Center. As a fluent speaker of English, French, German and Italian, she intends to point out the influence of the ancient languages on the modern ones. Experiential activities such as field study trips and visits at important archeological sites, as well as greek traditional dances are also integrated in her teaching. She is a member of the non-profit Greek Union for Supporting Rhetoric in Education and she regularly volunteers to coach students in public speaking and debating.