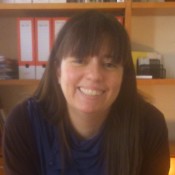 Dr. Marta Cabrera is originally from Granada, but tries to travel the world as much as possible. After earning a degree in English and then in Spanish from the University of Granada, she moved to the United States to start her career as an instructor of Spanish language and culture while completing a Master´s degree in Foreign Language Teaching (University of Delaware) and later on, a Ph.D in Spanish and Cultural Studies at Rutgers University (NJ). Her research interests include the representations of Spanish identity and the impacts and implications of peripheral and state nationalisms in contemporary Spanish culture and identity. Dr. Cabrera returned to Granada a few years ago, where she has been involved in Study Abroad programs ever since. What she most loves about her job is being able to help and interact with students while witnessing their personal growth and language improvement.

Just like the students do not return home being the same person they were, I am changed myself by sharing and partaking in their daily discoveries, amazement, and achievements while abroad."