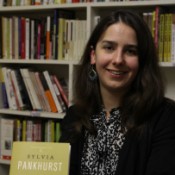 Kate is a historian, writer and lecturer working on the history of Britain and France in the nineteenth and twentieth centuries.  She undertook her PhD, Conjuring away the Revolution: Parisian popular culture in Marx’s writings on the French Second Republic, at Queen Mary, University of London.  She holds an MA in Paris Studies: History and Culture of the City from the University of London Institute in Paris.  Kate is particularly interested in political history, the history of ideas, social movements, popular culture and urban studies.  Her first book, a political biography of the suffragette Sylvia Pankhurst, was published by Pluto Press in 2013, and in the same year she co-ordinated the Emily Wilding Davison Memorial Campaign.

‘An Engels for the Bourgeoisie’, review of T. Hunt, The Frock-Coated Communist: The Revolutionary

Life of Friedrich Engels, in International Socialism Journal, No.124, Autumn 2009.

Appearances in the media

‘How suffragettes won women the vote and changed politics’ episode in ‘One Hundred Years of the Women’s Movement’ series presented by Gemma Cairney (BBC Two, 4 June 2013).