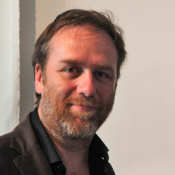 Fabio Barilari graduated with honors + publication of the thesis, in Architectural and Urban Design at the University of Rome “La Sapienza”. Member of the Board of Architects of Rome from April 1996.

He works professionally in the fields of Architecture, Urban Design, Illustration and painting.

As architect, he is specialized in complex architectural and urban structures. He has collaborated with important studios such as Eng. Riccardo Morandi, one of the leading international figures in modern engineering, Arch. Massimiliano Fuksas, with whom he won the International Competition for the new Congress Center of Rome “La Nuvola”, and Arch. Manfredi Nicoletti for the project of new Hall of Justice of Arezzo.

Parallel to these collaborations, in 1996 he founded the studio Fabio Barilari Architetti which, over the years, developed numerous projects on all scales of intervention.

The studio has been awarded and short-listed in several national and international architectural competitions and it has obtained, in particular, the 1° Prize Inarch both in 2000 and 2010.

FBA projects have been published worldwide and have been presented in important exhibitions, among which the Biennale of Young European Artists of the Mediterranean in 1999 and the Biennale di Venezia both in 2000 and in 2010.

In May 2012, the studio was selected to represent the Board of Architects of Rome in the Triennale di Architettura held in Sofia (Bulgaria).

In 2013, the project Picture House was selected for the Golden Medal for the Italian Architecture – Triennale di Milano.

From 2012 he teaches in the courses of Modern Life and Drawing at Arcadia University Rome. From 1995, he taught Architectural and Urban Design and Theory, History of Architecture, Drawing, at La Sapienza University, Cornell University, Iowa State University and California Polytechnic in Rome.

As illustrator, since 2013 he has been collaborating with the Goethe-Institute, on a research on the main German cities in their relation with the on-going program of new public libraries in Germany.

He collaborates with the Board of Architects of Rome AR-Magazine and has been published in Illustration, music, and culture magazines.

His works in the fields of illustration and painting have been presented in several national and international publications and personal exhibitions in Italy, France, Germany, Spain, UK, Hong Kong, China, South Korea, Ukraine and in two exhibitions at the US Embassy in Rome.

The research developed in these different fields, was presented for the first time in Aug 2011, on the magazine ABITARE, directed by Stefano Boeri.

In 2013, he presented his project “Il Senso delle Cose” in a personal exhibition at the Chiostro del Bramante Museum.

In January 2015 he presented his works in all these fields of research at the INTERNO14 Gallery in Rome.

His painting "30 Nodi" is currently on show in the exhibition "Saatchi Screen", at Saatchi Gallery in London.