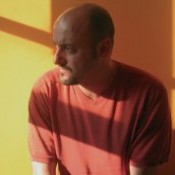 Àngel González Llàcer studied architecture from 1979 to 1982 at Escola Tècnica Superior d´Arquitectura in Barcelona. He obtained his Degree in Fine Arts in Sculpture at Sant Jordi Facultat de Belles Arts de Barcelona in 1987, where he also passed a Ph.D. course in 1988. Between 1971 and 1979 he studied music, piano, French and English. He has been teaching drawing, painting and sculpture at Escola d´Art Sanvisens since 1987. From 1989 he has been teaching landscape painting in intensive summer stages in Mont-Roig del Camp, Tarragona.

In 1994 he began lecturing and teaching art classes at UIAH, University of Art & Design Helsinki, Finland, as well as the Polytechnic School in Lahti, Finland, and the Altos de Chavón School of Advanced Design, Dominican Republic which is affiliated to Parsons, New York.

As an artist he had his first solo exhibition in 1986 in Agora 3 Gallery, in Sitges, Barcelona. Since then he has been regularly exhibiting, mainly paintings, in galleries in Barcelona, Madrid, Andorra, Modena, (Italy), New York, Paris, Montreal, Biberach (Germany) and Helsinki (Finland).