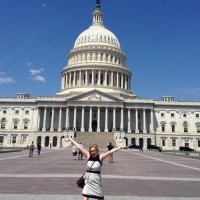 Amsterdam was probably one of my favorite travels so far- I would definitely recommend it if you plan on studying abroad. One of my closest friends is studying abroad in Rome, and we planned to meet in Amsterdam for a fun weekend. It was sad to say goodbye on Monday morning, but I will see her again in a month back in the United States! Crazy!

For the first day, we walked through Albert Cuyp Market- a street market just outside of Amsterdam’s concentric canals. After, we headed to the Heineken Brewery for a tour. This was my second time touring a brewery, the first one was Guinness, and I definitely preferred Heineken. It wasn’t as crowded and we still got a pint! Our last stop for the day was the Anne Frank House. It was a very interesting museum, I appreciated the tour, and it was fascinating to learn more about Anne Frank’s life and the other people involved in her story.

The second day was dedicated to museums! I love museums so I was pretty excited. The Museumplein is a nice green area that museums border. Amsterdam’s iconic letters “i amsterdam” sit in front of the Rijksmuseum, which is dedicated to Dutch art and history. The Rijksmuseum contains Vermeer’s The Milkmaid and Rembrandt’s Night Watch. I don’t know that much about art, except what I’ve learned from being on my school’s Quiz Bowl team, but it was amazing to see such famous paintings in person. After the Rijksmuseum we had a delicious lunch that consisted of waffles and cappucinos before heading to the Van Gogh Museum. The Van Gogh Museum was great- I was dubious at first. An entire museum just of Van Gogh’s paintings? But it incorporated biographical information about Van Gogh and also included painters who had inspired him and painters he had inspired. After, we wandered to Vondelpark where we took a nap in the sunshine. While resting, a bird pooped on me so that spoiled the tranquil moment.

On the third and final day we rented bikes! Amsterdam fulfills its stereotypes wonderfully- and we were not disappointed biking around the city for the day. We stopped in shops and boutiques, walked our bikes through Bloemenmarkt- the floating flower market, bought some Gouda, got lost, admired the tulips, and, but mostly, tried to navigate biking in the busy Amsterdam streets! It was fun having a day to explore the city at our own pace. At one point during the day we were eating lunch at a café when I was struck by curiosity. I wanted to know the location of the famous Fault in Our Stars bench. Coincidentally, it happened to be around the corner from the café. I’m not a huge fan- I haven’t even read the book, but we had to visit it! We were the only ones at the bench, but it had been scribbled on with quotes from the book and love locks attached to it’s posts.

I was sad to leave Amsterdam, but I had fond memories and Gouda! (My favorite’s Gouda!)

Looking ahead: I’m leaving for Copenhagen tomorrow! But after I return it will be time to buckle down for exams. :(