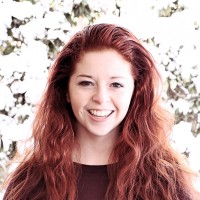 As I stepped out into the New Zealand autumn sun, I immediately began to sweat underneath all the layers- a long sleeve shirt, zip up hoodie and heavy jacket on top, leggings and snow pants, and one pair of Merino socks and a second pair made of wool inside my boots. We waited anxiously at the edge of an open field with four small helicopter pads made of stone laying before us. Maddie and I were both given neon green wristbands that said ‘flight 3’ in black permanent marker. “You get to sit in the front,” the guy told us with a smile as he put them around our wrists.

It seemed like an eon passed by the time our helicopter arrived. It landed with a gust of wind and ear-deafening noise, the sort of thing you’d instinctively run away from but instead we ran toward it. Hopping inside, we buckled in, put on our protective ear-ware on and just like that, we were off.

Even as the chopper lifted off the ground and we headed into the mountains, I was still struggling to comprehend the reality I was in. Not only was I in New Zealand (which, to be completely honest, still in some ways doesn’t seem real) but I was a few days into a two-week road trip of the South Island, something that I had been planning for weeks and had finally arrived. As most would, I naturally assumed that, at some point, this tiny country would stop impressing me so much. I assumed that there would be a sort of plateau of excitement where the mountain ranges would start looking the same and the allure of all-day hikes would disappear. Instead, everything kept topping the last. Every hike had a better view than the one before, every adventure seemed to out-do the last without even trying. Those thoughts loosely fluttered through my mind as the helicopter pilot took us higher and higher, over the mountains and finally landed at our destination: the Franz Josef Glacier.

On the ice, we met our guide Tom, an American-turned Kiwi who, after his own heli-hike amongst New Zealand’s glaciers, was inspired to try some serious mountaineering. After training in Montana, Washington and Alaska, he found himself back in New Zealand.

Tom led us over the face of the Franz Josef, taking us through tight crevasses and ice chambers, all of which would be gone in a day or two and replaced with new ones. The Franz Josef glacier is one of the most active glaciers in the world with the bottom moving at nearly one meter per day and the top at five meters per day (basically light speed in geological time!). Tom explained to us that’s one of the reasons his job is so fun- every day, the glacier is different and thus no two hikes are ever the same.

Our two hours on the ice flew by and before I knew it, the helicopters had returned to take us back to the rest of the world. But it was then that I realized just how alive the earth is. It has its own pulse, its own rhythm. It breathes life back into the world and it will forever be changing. As my journey around the South Island continued, I realized New Zealand, and wilderness as a whole, is not something to be conquered but rather something to be continually in awe of. Its power, its beauty, its vastness is almost to grand to believe and living in New Zealand, I’m constantly reminded of that.

In wake of my glacier hike (something, mind you, I never even dreamed I’d have the opportunity to do, let alone actually do it), I’m left with only one thought: veni, vidi, amavi; we came, we saw, we loved.