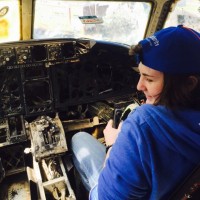 These past few months have been of discovery and exploration and learning, and I have some very big news that you probably already knew: plans fail.

This week is midsemester break, and I set off for New Zealand to trek through the northern island and see some of the most famous landscapes in the world. And while I am filled with excitement and wonder at the beautiful volcanic earth and remote villages that surround me, I am also incredibly aware of a very real and oft-ignored fact of traveling alone: it can be disappointing. I don't mean in that you get lonely or that no one is there to take that perfect profile picture for you (although this is true as well). But no, I mean that sometimes no matter how hard you try, your carefully-laid itinerary fails.

This trip was meant to be full of hiking, thermal pools, glowworm caves, and long bus rides through the countryside. While most of this has come true it's also been full of anxiety and a little bit of bitterness. It's been rainy (and thus my joints have been achey), I've missed buses that only come twice a week, and I've booked hostels that were subpar in every way imaginable.

Now, pre-abroad Saul would've been devastated by this. She would've shut down and given up. But I've learned something through this journey: just because traveling isn't glamorous and doesn't always go as planned, it doesn't mean it's not 100% worth it. In missing my first bus upon arrival in New Zealand I hopped another to a random small city, and then another after that. I got to see the rolling, lush green hills covered in cows and horses and sheep. And I got to explore a small, average town in middle-of-nowhere New Zealand.

It wasn't the glamorous caving expedition in remote New Zealand I'd had planned, but instead I explored a small-town library, saw everyday Maori culture entrenched in the Kiwi lifestyle, and even managed to make a friend in my hostel. And I've made a new promise to myself. No matter where I find myself, no matter how far off-course, I'm going to find something interesting about the place I'm in. If I fail this simple task then I really wasn't trying hard enough. Seriously it doesn't take a lot to hold my interest. Most shiny things do the trick.

I'm definitely not ecstatic and losing what was potentially the opportunity of a lifetime (not to mention the money I'd prepaid for my hostel), but I am okay with it. As they say, I made my bed and now I'm lying in it. And you know what? It might not be a huge, Tempurpedic mattress covered in pillows, but it's definitely not the cold hard ground. I'm grateful for this experience, even with all the mess-ups and getting lost.

Not only have I gotten to see what the life of an average New Zealand inhabitant is like, but I've gotten to see some of the lower-income areas of the country that nobody talks about. I've never much relished the notion of being a typical tourist bouncing from sight to sight. I like to get to know a culture, understand the economy and infrastructure. Plus, if I hadn't stayed in the small coastal city of Taurangi then I wouldn't have wandered onto a farm and seen a cow much closer than I ever had before. We made solid eye contact from about 100 feet away and I swear I nearly swooned.

I also would never have met Lilly, the 11 year old girl who sat in front of me on the bus. We talked for over an hour about Star Wars; how hard English is (she goes to Maori school and can't read English as well); about the history of the volcanoes in New Zealand; and her favorite character from Suicide Squad- Harley Quinn, whom she decided to draw on my forearm. That was an experience easily worth giving up my glamorous stay. The hardest part of that trip was having to say no when she asked if I'd be staying on the bus when it stopped for lunch and watching her face drop in disappointment.

You see, maybe things haven't been going exactly the way I wanted them to, but life never does. And if I get all upset about things not going my way then I'm never going to talk to 11 year olds about Star Wars trading cards. And clearly that's where the valuable life experiences happen. Sometimes the best times don't come from the extraordinary sightseeing, but rather from the mundane everyday world that you take in with a new sense of wonderment. At least, that's what I keep telling myself.