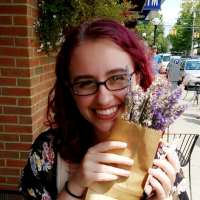 We are well into the second half of the semester, and it’s wild to consider November being so close to its end and my remaining time abroad consisting of less than a month. I’m coming to peace with this reality.

For now, though, I’m revisiting the first day of my fall break and the week leading up to it – not the midterms nor the stress of studying, but my first-ever solo vacation. I kicked off my fall break with a two-day trip in Naples.

The trip was only a thought in my mind before I committed to going. I’d never taken a vacation on my own, let alone booked my own hotel room before. Typically, I travel or vacation with at least one other person. I chatted once with an Arcadia professor about Naples, and how I’d really like to go visit the city during my time in Italy. Being from Naples himself, he was excited for me despite my plan not even existing yet. The next week I mentioned that I was even more strongly considering going, and he mentioned that he knew someone who would take groups around the area. To this, I told him that I’d be going alone. I could tell he was hesitant of my choice to tackle on my own a city which has been described to me mostly as chaotic, but he proceeded to help me plan my trip.

Throughout the week, the Arcadia office and my classmates learned of my travel plan, and on more than a few occasions I was advised to be safe and aware of my surroundings. While I’ve never taken a vacation alone, I do spend lots of time exploring alone. I knew how to be safe and how to be a woman traveling alone, but I took their advice close to heart. Even my grandfather told me in an email with travel tips for a different vacation that Naples is a “gritty” city. I knew why everyone was warning me, but aside from any possible language barriers creating even a minor conflict, I had no fear. It’s difficult to enjoy a trip if I spend the entire time being worried about myself and my surroundings.

I was right to have no fear. I woke up early on the Friday morning after my midterms were all finished, arrived at Termini, waited for my train’s information to display on the big screen, and told myself that the day would be unlike any other that I’d ever experienced. I hadn’t planned anything for myself besides making a list of a few things that I wanted to see, so my first day in Naples was truly grounded in wandering. It took me an hour to feel more than remotely comfortable walking aimlessly, but once I got closer to the city’s center and had a destination and some fried street food in me, I was on a roll. I saw what I wanted to see and ate what I wanted to eat. I even stumbled upon the Netflix show Sense8 being filmed. The next day, I woke up early to walk an hour along the sea just after sunrise and felt, for the first time in a little while, peace.

My time in Naples was, in fact, unlike any other. Being alone on this small vacation was what I needed. Yes, the city was chaotic, but I knew roughly what to expect. I was not bothered, and I had the skills of an independent person to carry me through my journey. I even spoke with another solo traveler whom I met atop Castel Sant’Elmo, as we took one another’s photos in front of the breathtaking view of the city’s rooftops, sea, and Vesuvius. In Naples, I didn’t feel unsafe. I felt like a stranger for sure, but the thought never crossed my mind that I would encounter any real danger. I did have at least one embarrassing moment caused by a language barrier involving me forgetting the very simple word for “already,” but that was an insignificant moment.

And sure, the streets are hard to cross when the cars don’t stop, but even that is a learning moment (following my trip, I joked to my friends that Naples taught me how to cross the street). I value the caution that my professors and family advised me to take, but I’m writing this to tell other young women like me who might want to travel alone that it can be a good, fulfilling experience. Within a semester of being constantly with others, maybe you’ll feel the need to take a break and be outside the parameters of a group setting. For me, it was therapeutic to walk all day without knowing exactly where I was, without having to wait for anyone. If you need the time in a setting where you are truly alone among millions of people, do it. If you want to experience a new city via your decisions, do it. Do be cautious, but don’t be so concerned that it takes away from your experience of finding yourself in a new context.

Self-awareness is an important practice of mine as I grow in the world, and my first solo trip was an important part of this semester as well as the beginning years of my 20s. And if you do take a solo trip to Naples like I did, I can also suggest treating yourself to a nice table-for-one dinner in a nice restaurant. It’s all worth it.