The World is a Beautiful Place 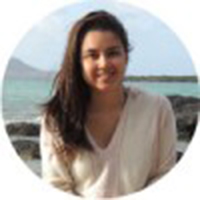 By Jenni A., Italian Language and Culture in Florence, Italy

The past two weeks have gone by even faster than the first two if that’s even possible. I’m realizing there isn’t nearly enough time to learn about all the facets of Michelangelo’s life and art. I’ll have to keep reading long after this trip is over. Similarly, there isn’t enough time to walk every street of Florence, especially the stress of travel has won and I ironically have a cold as temperatures have been persistently reaching 100. Furthermore, when I keep finding places I love like Edoardo il Gelato Biologico and La Milkeria it’s hard to go anywhere else.

The trip organized by the school to Rome was much more successful than the attempted trip to Nice. The first day we went to the Vatican and walked through its beautiful museums and the Sistine Chapel. Rome was no cooler than Florence in terms of the temperature, but the wide open streets and more modern feel were an interesting change of pace. However, I missed how walkable Florence was when we had to cram over 40 girls into a public bus to get around the city. The next day we went to the Colosseum, the Roman Forum, and the Trevi Fountain. Feeling nostalgic, I dug up a picture of myself throwing in a coin five years ago and I thought, “Wow it worked! I’m back in Rome.” These places attract so many tourists because no matter how many times you see them, they are still awe inspiring. They are a physical manifestation of time passing and just how long people have been innovating and creating. As a student of engineering I find it very humbling to see these structures still standing. 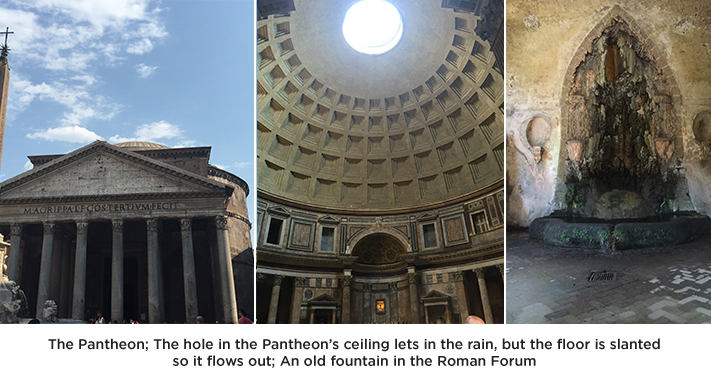 We made it back from Rome just in time to celebrate the Fourth of July in Florence. I wasn’t sure what to expect from my first Independence Day abroad. We decided it was the perfect time to try the American themed Diner near our apartment. They had burgers that weren’t bloody (as is usually preferred in Florence) and free tap water! Nothing says America like free water at a restaurant. The festivities continued at an Irish pub that showed its support with American flags and songs. The multinational bar catering to tourists had an Australian bartender who would request patrons to recite the Pledge of Allegiance. Those who failed were punished with a water gun! 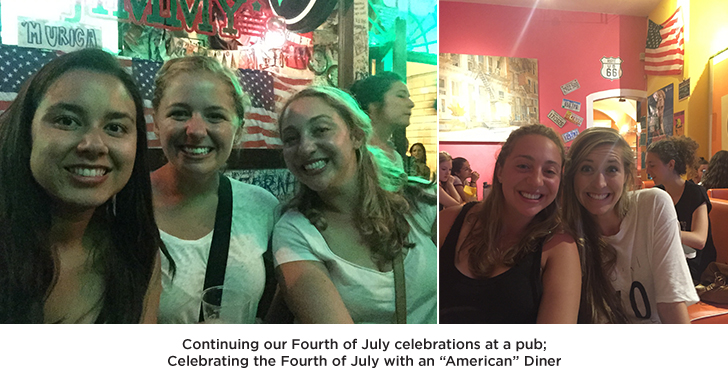 Escaping the heat during the rest of the week was tricky. There’s no air conditioning in these beautiful old buildings! There was one museum advertising air conditioning, and that is how all of my art inclined friends ended up in the Galileo Museum. They had floors of Renaissance era scientific instruments including two telescopes that Galileo made and some of Galileo’s… fingers?! They were in glass cases similar to the relics I’ve seen in Italian chapels. It’s hard for me to decide if this practice is intriguing or disturbing, but it’s definitely unique. 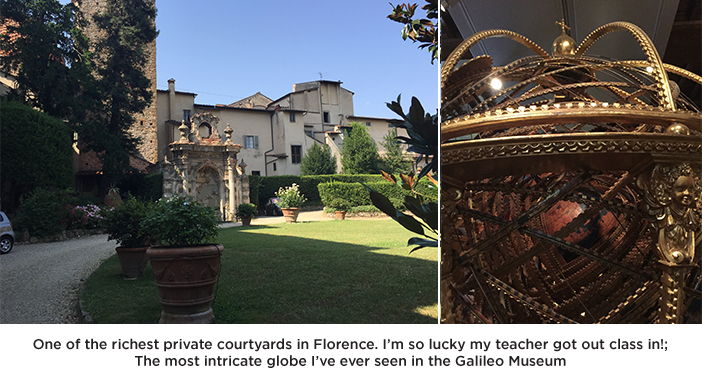 This past weekend we went on a long three day trip to the Amalfi Coast. We stayed in a hotel in Sorrento with a beautiful view of Mount Vesuvius. On Friday we took the ferry to my favorite place in the world, the island of Capri. Unfortunately the seas were too rough this time to enter the Blue Grotto but we saw beautiful rock formations on the boat tour around the island. The last time I was in Capri I walked through the expensive hotels and shops to a garden and lookout point over the lemon tree covered cliff sides. It worked out perfectly that this time we went down to a rock beach and I saw a different side of Capri. Capri is famous for its lemons and I loved trying them in a new drink of lemon, orange, and mint, called Granite. My main mission for the day was to find handmade lemon chocolate that I’d been obsessed with the first time I visited. After visiting several shops selling everything from Limoncello and lemon soap to lemon magnets and lemon towels, I was starting to lose hope. Miraculously the very last shop I was going to try had it and I bought an embarrassing amount.

Saturday, we went to Positano, which had a much larger public rock beach. The rocks feel nice through your towel like a hot massage, but they make flip flops a necessity right up to the water’s edge. They’re impossible to walk on! It’s pretty easy to spot the Americans helplessly waddling and tumbling along the pebbles trying to stay upright. We rented paddleboards that we took out to a smaller beach that had a place to climb along the cliff and jump off into the water. The water was a clear turquoise that allowed you to see the rocky bottom and made jumping terrifying.

Sunday started with a hike up Mount Vesuvius. Both beaches in Capri and Positano were at the bottom of a few hundred steps, but at least there were steps. The path up Vesuvius was a forty five degree angle made of gravel that your shoes would sink into and cover you in dust. Luckily, we were shielded from the sun and misted by clouds crashing into the side of the mountain. We finished the trip with Pompeii and the friendliest tour guide. I always find it funny that one of the most well preserved buildings was the brothel. Even the indiscrete frescos remain. This time I picked up some interesting facts I didn’t remember learning before, such as small white marble was put in-between the street stones to act as reflectors of the moonlight at night, and some pillars are partially brick because the Romans repaired Greek structures with bricks.

My favorite part of the weekend was leaping off the rocks into the water. Even though it was a little scary and I had to trick myself into jumping, the fall was exhilarating and the cool water was the perfect reward. For me, I view traveling the same way. I love beach vacations where you just lay out on the sand and relax, but vacations where you travel to explore new places aren’t meant to be relaxing. Traveling is supposed to be a little scary because you’re not sure if you can climb 600 steps or you don’t speak Italian, but those are also the things that make traveling so exciting. The reward is the new sights and food you wouldn’t have had otherwise. I hope I can always trick myself into going because the world is a beautiful place worth seeing.

Jenni Antane is a student at Northwestern University and is blogging from her summer abroad with the Italiana Langauge and Culture in Florence program, in Florence, Italy.