The Reels of History 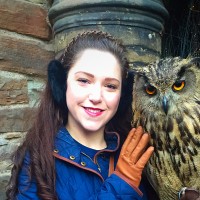 If you are going to visit Scotland, especially the Highlands, a key destination is the Culloden Battlefield. I was lucky enough to see the historic site thanks to Arcadia and their Isle of Skye and Highlands travel weekend. We hit many stops in those few days, but in the blur of busing from one place to another, Culloden Moor sticks out starkly in my mind. I was already familiar with the history of the field; it was the place that changed life for the Highland clans forever on the fateful day of April 16th, 1746. Bonnie Prince Charlie made the grave error of sending his weakened troops into battle against well-equipped and well-trained British soldiers, and the Scots were slaughtered as a result. Most of the remaining clans were hunted down, their homes were destroyed, and Scottish Highland culture was nearly stomped out of existence (for instance, playing the bagpipes, wearing clan tartan, and speaking Gaelic were outlawed).

Before I even reached Culloden Moor, I knew exploring the site was going to be a very solemn experience. Still, it felt like the wind was knocked out of me as I slowly made my way down a pathway lined sporadically with clan headstones. Step after strained step, I passed the Mackintoshes, the Macleans, the Camerons, the Frasers, and countless other families, some graves simply marked “mixed clans.” Most of the students were making small talk, but it seemed disrespectful to speak or divert my attention away from the memorials of dead Highland soldiers, so I steered away from the group and tried to remain introspective. I found a secluded area where thick foliage of the moor, composed of various plants which died over winter, condensed into an intricately woven state that nearly obscured more headstones. I stood very still, closed my eyes, and focused on the silence surrounding me which felt tangible in its heaviness. I wondered if this land had felt and remembered the traumatic suffering from the events of that day in April, all those years ago. It would explain the somber ambience which seemed to linger in every particle of air, remaining ever-present despite the suppressive forces of time.

I wished I could have stayed in the field longer to explore the land which changed the fate of a nation forever, but we were only given a couple of hours at Culloden, and I still had an entire museum to comb through. As with most museums, there were recovered artefacts like rusted, misshapen cannonballs, carefully preserved bits of cloth that were once part of a tartan, and pistols embellished with ornate colors and designs characteristic of the eighteenth century. But what made this museum different from so many others I’ve visited was the incorporation of modern technology to enhance the storytelling aspect of the battle’s history. When I went to stand in front of certain displays, a silhouette of a British or Scottish solider appeared against a white background, and an omniscient voice, presumably acting as the shadowed character before me, read out quotes which were apparently written by a historical figure. The speaker system above my head made it sound like the voices were coming from right behind me, making the experience more realistic. But these displays paled in comparison to the reenactment room, where one could get a brief but frighteningly authentic view of the bloody and ruthless Battle of Culloden.

The room was small and square-shaped; each of the four walls were completely covered by screens playing a video of a vacant Culloden moor, the thickets swaying gently in the breeze. Then, like ghosts solidifying into existence, the soldiers stood on opposing screens—the English and the Scottish. Adorned in tricornes and neatly buttoned uniforms, the English prepared their muskets and polished their cannons, seemingly nonplussed about the battle about to unfold. The Scots had a grimmer air about them, shuffling into a fighting position with their broadswords and (notably fewer) firearms at the ready. I knew shots were about to be fired once the bagpipes began to wail. Though I’m sure it’s recorded in history, I can’t recall who fired first—splitting my attention between both screens, all I remember is jolting in shock at the sound of gunfire, and being overwhelmed by battle cries and the subsequent discharging of weapons. The most disturbing moment was when the Scots’ screen focused on one highlander, and the sound of his panicked breathing filled the room, drowning out the clamor of battle. I barely registered the petrified look on his face before a musket ball tore through his eye socket, and the camera refocused once more on an omniscient perspective of the fight. The video only lasted for five minutes, a reflection of the battle’s pitifully short duration (supposedly less than an hour). When the smoke cleared, many Scots were strewn about the field, staring lifelessly up at the clouded sky. As a redcoat announced English victory, his voice grew faint and all the men gradually faded out into the mists of time, leaving only the whistling of wind through the moor’s thickets in their wake.

If the Jacobites had somehow managed to win that battle, life in Scotland would be drastically different today. I’ve found during my time here that I often wonder what would have happened if Bonnie Prince Charlie’s troops had been stronger, better fed, and better armed—if, on that fateful day in April 1746, the Scots had gone down in history as victorious and independent instead of oppressed and tyrannized. Whether you’re visiting Scotland for a week or studying abroad here for six months, seeing Culloden is vital to understanding the complex puzzle that comprises Scottish history. It may not be as glamorous of an abroad exploit as drinking wine in the vineyards of Italy, or touring the Eiffel Tower in Paris, but it is a sobering experience that garners appreciation for the fragility of life and the bravery of loyal men.