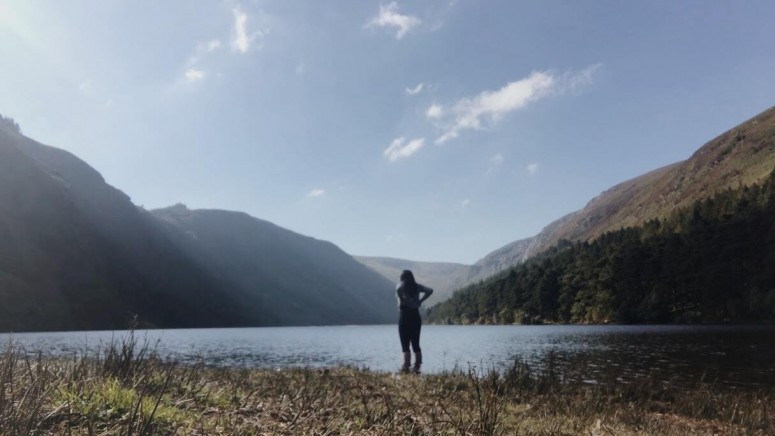 Every action has an equal and opposite reaction. For each scenic vista and friendly local I have encountered since coming to Ireland, I have met twice as many little stumbling blocks where I feel somewhere in the range of disgruntled to dejected. Hands down, these moments where things get tough are worth it for even the simplest pleasure of having coffee in a local café (let alone for the most magnificent opportunities which come a little less frequently but are saturated in thrilling or warm-fuzzy feelings). However, it can be hard to try to think to the next ‘good part’ of studying abroad when you’re in the middle of a ‘bad part’.

What I learned from my four months in Vienna last fall and the month I’ve spent so far in Dublin is that the best way to deal with the tougher parts of being someplace unfamiliar is to lean into it. The fun you had last weekend or the things you’ll do tomorrow can’t change the way you’re feeling right now, so it’s best to address the reason for your sadness, give yourself some time to validate your emotions, and then try to find some sort of silver lining in your situation.

When things get tough, it’s important to try to let yourself feel and try to understand the bad stuff before you move on because your reaction is healthy and normal. Even though I know that I am so lucky to be here, it still sucks to miss the bus, and it’s not wrong to be a little bummed out. Realizing this actually helps with getting myself out of the funk, because it keeps me from going down a spiral of guilt or self-blame.

The next step, though, is to immerse yourself in the moment enough to find the parts of it that aren’t so bad. For me, the most common ‘upside’ to a bad experience is the chance to take humor in my mistake. My best travel stories always come from when something went disastrously wrong. Learning to laugh at my mistakes has helped ease my self-doubt without erasing the lessons I learned in the process. I try to celebrate those places where I mess up, especially when traveling, as a healthy way of staying positive… and humble.

Moving to Ireland has been easier than Austria was last fall because the most common language here is English. I didn’t know a lick of German before Vienna, so I was completely reliant upon the kindness of strangers to even get a cup of coffee. That’s not to say that I’m an expert in how things work in Ireland, though. Any new city in the world is going to have a new system of public transport, a series of neighborhoods, and other local secrets to learn. A new country and a new continent present an even bigger set of challenges, and I’ve been running around like a chicken with its head cut off trying to figure it out.

This past month has been full to bursting with moments when I’m behind the learning curve. I’ve had the night bus refuse to pick me up, paid a full fare for a short bus journey, and gotten off at the wrong stop far more than once. I can’t help but anxiously follow the bus route on my phone even when I know exactly where I’m going, effectively outing myself as a tourist to all the locals around me without even opening my mouth. My sleep schedule is an ever-changing pendulum, and some of my showers are lukewarm because of the small supply of ready hot water. I’m constantly torn between raising my hand to participate in class and holding back when the teacher’s question gets no reply because none of the other students here speak up in class very frequently, and so, my participatory behavior, which is average in the US, is over-the-top here. I’ve learned that just because you have good friends, doesn’t mean that they’re always interested in traveling to the same places as you are, so you may have to go it alone sometimes to see what you want to see.

These little failures and misconceptions are embarrassing to list and disheartening to experience, but they are a reality. Making them a not-unpleasant reality is just a matter of perspective. The nice thing about living in a big city and attending a big university is that there is a sense of security in the anonymity of the masses. So what if I look like a total newbie on the bus? I won’t see any of the other passengers ever again. I’m conscious that I might be stared at by other students when I put up my hand more than once in a class, but the lecturers always seem genuinely pleased when I have something good and relevant to say- that, or they’re really good actors. The occasional lukewarm shower means that every subsequent hot shower is its own little victory. The biggest upside of all is that none of these struggles are mine alone. When the night bus driver shook his head as we tried to flag him down, my roommate was right there with me, and we shared a taxi home. My friends and I discuss our little stumbling blocks together and are able to laugh about them and bond over how none of us have any idea what’s going on most of the time. Oftentimes the difference between a nightmare and an adventure is who you’re traveling with.

I feel lucky to have this experience where the good parts so far outweigh the bad and to have the sort of easy problems which can be solved with the right mindset. Every day, I try to resolve– to boldly do what I’m bad at and openly ask for what help I can receive, and almost every day, that in itself leads to success and joy. I may not be ahead of the learning curve, but I’m going to try to have some fun chasing it down.