The Art of Flamenco 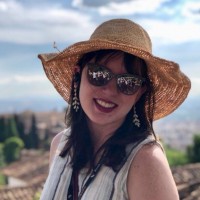 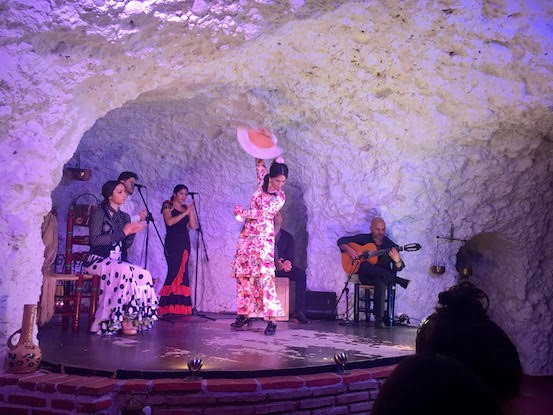 In my few short weeks here in Andalucía, I have already fallen in love with flamenco. I had always heard of flamenco and had even read a book about it before traveling to southern Spain, but I did not quite know what to expect. Originating here in Andalucía, a typical flamenco performance consists of a classical guitarist, one or two singers, someone who keeps the beat on a box-like drum, and several dancers (typically female, but occasionally male). These exhibitions take place in a variety of atmospheres, from street performances to dramatic caverns in the Albaicín. Both the Arcadia program and the Centro de Lenguas Modernas ensure that you will be exposed to flamenco at some point during your visit.

The first performance I saw took my breath away. While exploring the architecturally stunning Plaza de España in Sevilla, I heard the unmistakable sound of castanets and had to investigate. What I found, in the center of the plaza, was a sizable flamenco troupe in the middle of a street performance full of twirls, claps, clicks, and stomps. I was immediately entranced. I sat for dance after dance, enraptured by the music of the guitar, the passion in the vocals, and the dramatic range of emotions conveyed through the dance. Each woman brought pain, heartache, anger, sensuality, and pure joy to the floor, often with several or all of these emotions combined into one number. Before long, I stopped taking photos and videos and just simply absorbed the moment, enchanted by each movement. I never knew everything that one can convey with a ruffled skirt and some heeled tap shoes. I was fascinated.

Since that first encounter with flamenco, I have since seen another street performance, a formal cavern performance with Arcadia, and an informative exhibition at the CLM. Each had its own unique personality. The street performance felt spontaneous and fun with its limited number of dancers and its bowl for tips. The cavern performance (as pictured) was definitely my favorite, a show for a formal audience with a fabulous guitarist, two incredible vocalists, a drummer who also danced, and two primary dancers all set against the dramatic background of a cave-like stage. Finally, the CLM exhibition was a learning experience, as the troupe discussed each type of dance/song before performing it. These explanations gave me a much better understanding of each type of dance, the emotion behind it, the setting in which it is performed, and where it originated.

Through all the performances I have seen, the sense of wonder has not faded. I love watching the face of each dancer transform from that of a beautiful and smiling young woman to the strong, serious, fierce, and sometimes playful performer that commands the undivided attention of her audience. Flamenco really sums up the culture of Andalucía: fun, dramatic, and proud. For any future Arcadia students, I highly recommend taking in as much flamenco as you can, and in the meantime, I’ll be keeping an eye out for more performances myself.