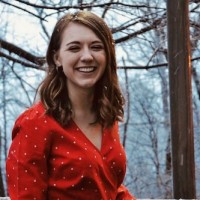 On a plane who-knows-how-many-feet in the air, so high above Scotland, I can only see the clouds that define it, I’m realizing there’s quite a lot to miss about this place I’ve called my home for the past six weeks. Of course, I can’t wait to return to my midwestern home—who knew I would miss cornfields so much? But I’m going to miss this European city so much more than I expected. If you’re wondering whether you should study abroad in Edinburgh, pop over for a quick trip, or if you’ve also studied and Scotland and want to reminisce a bit, this blog is for you.

I’ll miss finding hidden coffee shops within the city (there are at least a dozen on every block). I’ll miss the fresh air that comes from walking to class every day. I’ll miss meandering past gorgeous Georgian architecture. I’ll miss living in an international city—one filled with people from every nation and culture, where people are interested in learning about where others come from and genuinely want to learn from one another. I’m not sure how Edinburgh does it (perhaps it’s their constant cycle of international festivals), but they’re a country where all languages and accents can be heard along the streets.
Similarly, I’ll miss experiencing the history Edinburgh offers each day. Most churches in Edinburgh existed before the United States was founded (on a morning hike one Saturday, I found a crumbling abbey built in the 1400s). As someone who was raised watching documentaries, running across historically-significant buildings tucked into my everyday life was one of my favorite things about living in Europe.

But the historic buildings and winding streets aren’t the sights I’ll miss most about Edinburgh—Arthur’s Seat takes that prize. For six weeks, I lived less than 400 yards from an old volcano which dominates the skyline. The days when I was able to jog around this park or take a quick hike up its crags were some of my favorite. Nowhere else in the city brought me such peace and joy, and I’ll miss having such an incredible park in my backyard.

I won’t miss the constant hassle that comes from living in a city. I won’t miss the smells associated with city life, the endless barrage of flyers that is Edinburgh in festival season or living in a city constantly populated with tourists, but I will miss my experiences. It was such a joy to sit in coffee shops with friends from around the world, talking about politics and swapping poems. It was incredible to be called a writer in my program, to be given tangible ways to improve the craft of my writing and to be challenged and inspired daily by international friends. Thank you, Edinburgh, for your welcoming nature and all the memories I’ll carry for years to come.