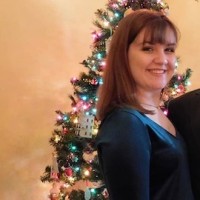 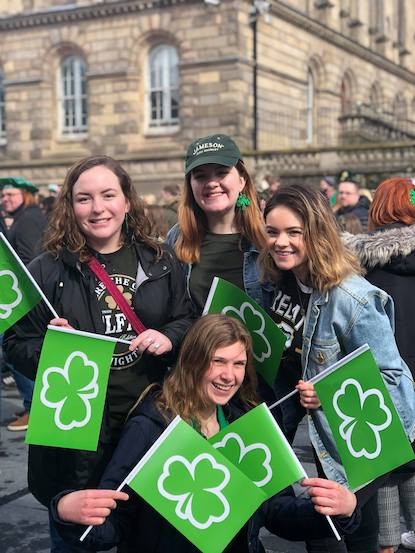 Being in Northern Ireland for this spring semester had one advantage I didn’t even think of until I got here— you get to spend St. Patrick’s Day in Ireland! Or shall I say, St. Paddy’s Day, since that’s what almost every here calls it. For weeks clubs, pubs, and everywhere in between had been advertising special events for the days around St. Patrick’s. All of us were excited to let loose and have some good “craic”— an Irish slang word for fun.

My day started off with the annual parade in the city centre. Loads of locals and tourists lined up around the route, which started out at city hall. I wasn’t sure what I was expecting. Belfast is a city, but not nearly as large as somewhere like Dublin, who puts on huge events for the weekend. I was pleasantly surprised, though: the parade was colorful and fun and brought together groups from all over the community, many of which I didn’t even know existed in the city. There were multicultural groups, such a Chinese lion dancing group and Indian drummers, to clubs like Belfast’s BMX Club, and dance and circus schools. Plus, plenty of music and larger-than-life floats and elaborately costumed performers. I have to say though, seeing how many locals were able to be involved in the parade was my favorite part of it all; I learned about different parts of Belfast’s population, while everyone was working together and having fun. You can see the video I put together of it here:

Next, my friends and I enjoyed some music at the free concert. A folksy Irish band came on (we described them as similar to Mumford and Sons) and played some traditional songs, such as “Whiskey in the Jar”. It rained for a few minutes at certain points, but mostly the weather was pretty beautiful, and it almost reminded me of a summer beach concert. Once the first set was over, we ventured into the pubs for a pint and some lunch. This is where we hit the only big downfall– the crowds. Everyone was out! If anyone is considering coming to Ireland for St. Patrick’s Day weekend, definitely ask yourself if you will be comfortable with a lot of people around and having to hit a few different places before getting a seat. We wound up grabbing some ciders at a pub and ducking into a restaurant for our lunch (some delicious burgers and fries).

After relaxing a while in my friend’s common room, we met up with some other international students and discussed what we had been doing with our days. We hung out in one of their apartments for a while, before we ventured off to a local pub with some live music. I ended my night dancing and singing along with the crowd. It was a wonderful day, and by the time I got home, I was exhausted! I would do it all again, and one day I would like to come back and experience it in a different Irish city to see the differences in celebration. It may be a bit “touristy”, but I recommend you try it out for yourself one day.