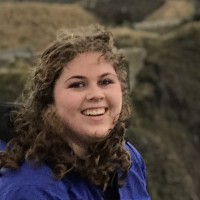 My last memorable experience while traveling over my spring break can be attributed to my geekish roots. Like many while growing up, the Harry Potter series was a massive influence in my life. I read all the books and watched all the movies, and am proud to say that I am a Slytherin through and through.

To conclude my fantastic spring break journey across Scotland, I chose to visit the Glenfinnan Viaduct. The Glenfinnan Viaduct is notable for having appeared in Harry Potter and the Chamber of Secrets when Ron and Harry are in the flying car trying to get to Hogwarts. Visiting Glenfinnan proved to me why the producers chose this particular location to shoot that scene, it is because the scenery around the viaduct and the viaduct itself are genuinely magical sites to behold.

To get to Glenfinnan, I took a short train ride from Fort William. Sadly, I did not get to ride in a Jacobite Steam Train across the viaduct, but I did get to witness the countless people who had journeyed out to Glenfinnan to watch any train cross the viaduct to fulfill their own Harry Potter fantasy.

Seeing such a conglomerate of people was more exciting to me than actually taking the train over the viaduct because even though I flew past them and was a great height above them, I could see the excitement and happiness on their faces. Their joy radiated off of them and it was contagious.

As soon as I exited the train I wanted nothing more than to feel the same enthusiasm all the other people had. So I took the first path with a sign pointing me in the right direction towards the viaduct. Of course the path I chose to take was an uphill hike. I understand that I complain quite a bit about all the hikes that I choose to do, but during the moment of hufflepuffing my way up the side of the hill, I think I earned enough house points to jokingly complain about my own experience. Plus, it adds to the descriptive narrative that I am attempting to build.

When I made visual contact of the viaduct, after hiking some ways to it, I instantly starting humming the Harry Potter theme song. This tune was stuck in my head all day on repeat and I was so giddy with excitement that I did not care if anyone judged me for singing it.

The viaduct was great to see, but admiring Loch Shiel from its bank was definitely my favorite part of the day. I had taken a light lunch with me and found a bench directly overlooking the loch and the mountains that surrounded it. There I sat, ate, and admired the landscape. The view was brilliant.

The loch was calm enough that there was a mirror reflection of the mountains that surrounded it making it appear like a parallel world. There were other people there enjoying the day with their family, friends, and dogs. It was a beautiful spot, and I hope that someday I can bring some of my loved ones there to experience it with me too.

Across the loch sat what I assumed to be a hotel, painted a pale banana yellow. It stood out against the various dark shades of natural colors of green, brown, and gray.

Up the main road past the viaduct, also sat an old stone church overlooking the loch. It seemed out of place and away from any other of Glenfinnan’s main buildings, but aesthetically speaking, the church seemed to be situated in the most ideal location. The main face of the church appeared jagged and triangular in shape making it look like the mountains that sat in the horizon behind it.

After an afternoon of exploring Glenfinnan, I returned to Fort William to spend my last evening of my spring break trip strolling along the shores of Loch Linnhe. I watched the sun set over the loch while wrapped in a flannel jacket and relaxing in the most blissful state I think I have ever achieved. Sitting there gave me a peaceful and reflective moment to fully appreciate my spring break trip in its entirety.

As I watched the sun set, I grappled with the various emotions I was feeling about my spring break journey coming to an end. I was sad that it was concluding, but I was thankful that I had been physically able and financially able to take a journey like the one I had. I understand that I am privileged for getting to be in Scotland and I am especially privileged to be able to do the things that I get to do.

My spring break trip may not have been the grandest European sightseeing adventure, but it was a grand Scottish sightseeing adventure. It gave me deeper appreciation and respect for the country I have had an honor to call my temporary residence over the past few months.