Saying Goodbye to a Place I Have Come to Love 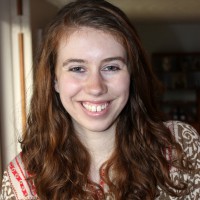 I’m sitting here on the lawn, on campus, looking out over the loch as the sun is setting and reflecting on my journey as the sun glistens on the loch. I’ve had the best adventures, traveling around Scotland and experiencing all that it has to offer and sad to say that I am leaving soon. Enlightened by these amazing experiences, I will miss everyone whom I’ve met along the way, though will keep in touch!

On Easter Sunday, Ashley and I went to Mass at a beautiful church in Stirling. The architecture and details were breathtaking. I went on a cycling trip to the Isle of Cumbrae with the International Society and we rented bikes and rode around the whole island. It was supposed to rain but it turned out to be a beautiful day! The island was gorgeous and there were even a few cows grazing and some baby lambs, so we had to stop and take a picture. I also went to Callander and adventured around Bracklinn Falls, hiking around there all the while capturing it with my friends GoPro. Two cool day trips involved visiting Stonehaven and St. Andrews, which both had really awesome castles and sights to see. 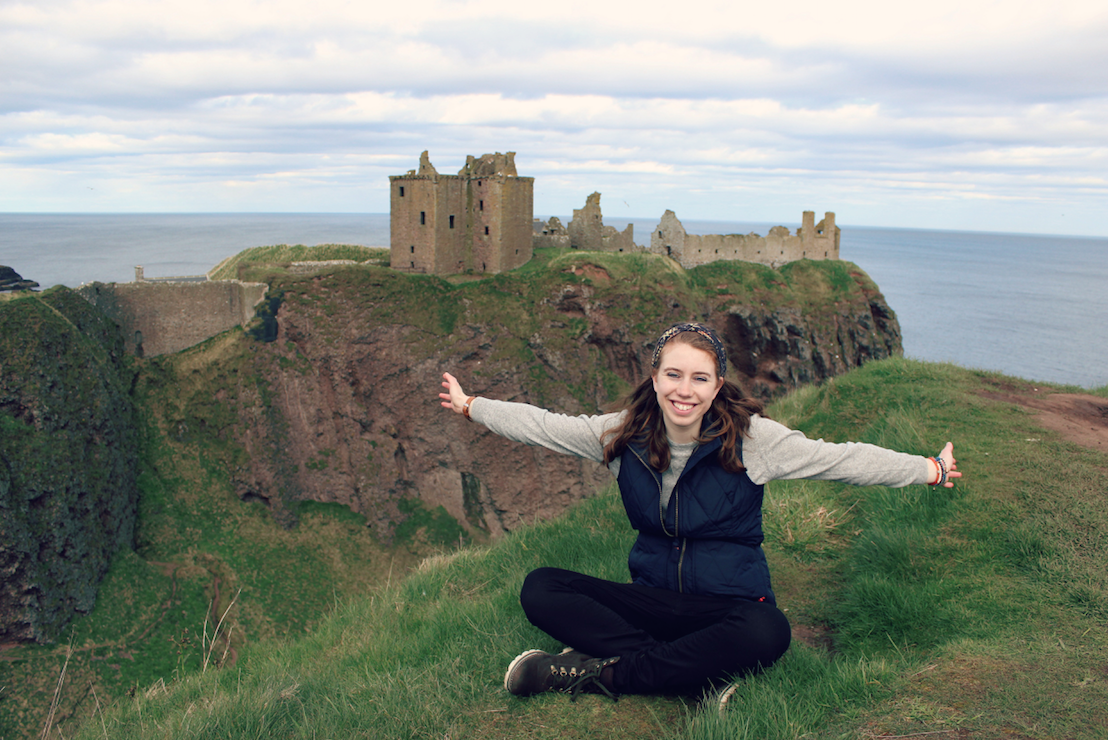 I was also able to attend the Sportsball in Glasgow with some of my basketball teammates and we had a blast! Another event in Glasgow, which I had the opportunity to see with a friend, Angela, was Swan Lake Ballet. Since my study abroad program was finishing, I wanted to do a few more things with friends. Megan and I hiked up Arthur’s Seat, to watch the sunset and see the awesome view of Edinburgh! Another day, on a spontaneous trip, friends and I decided to hike Dumyat Hill, overlooking University of Stirling campus.

The weekend of April 23-25 I went on a trip I’ll never forget! I went on a tour of the Western Highlands, Isle of Skye, and Loch Ness with Heartland Travel. We left Friday morning and got back Sunday evening. First we stopped at Doune Castle and then we went to Callander and stopped at Mohr Bread to pick up our lunch. I got a chicken and leak pie, which was delicious. Our next stop was to feed and see the Highland Coos who are adorable! The drive up to the highlands through the Trossachs was amazing and the views were breathtaking! We stopped at a few places to take pictures where the views were awesome! We also stopped at a hotel where they feed the wild deer so there were deer out front grazing and we fed them some grain and took some more pictures. For lunch, we stopped at Glencoe Mountains and hiked up to a beautiful view of the mountains. Next stop was the Glenfinnan Viaduct Bridge (better known to many as the Harry Potter bridge) and it was cool to see where they filmed part of Harry Potter. Our last stop of the day before going to our hostel was at Eilean Donan Castle. The sun was setting behind the castle, though so it was difficult to get a good photo of the castle but I got some cool silhouette photos. We stopped back at the castle on the third day, giving me a chance to take a better photo, with a bagpiper in front of the castle. The hostel we stayed at was really cozy, with a fireplace and awesome views of the loch outside.

The next morning, a nice sunny day, gave way to a clear view of the mountains from the hostel patio. Traveling on to Hamish, the tour bus, we arrived to the Isle of Skye for our first stop, with a spectacular view of the mountains, where we listened to a warrior story and snapped a few pictures. We then went to the town of Portree and got tea or coffee, venturing to the harbor, where many postcard photos are taken. We saw the Old Man of Storr carved into the mountain and we stopped and took pictures at the Kilted Rock where a rock looks like the pleats of a Scottish kilt and there is also a waterfall right next to it. Then we arrived at The Quaraing with its breathtaking views of the mountains and valley below. Our last two stops of the day were to the Faerie Glen and Fairy Pools, which were both so magical and beautiful. The Fairy Pools were a crystal clear blue and were being filled by waterfalls flowing from the mountains in the distance. There were so many sheep and baby lambs out on the pastures as we rode along the Western Highlands. 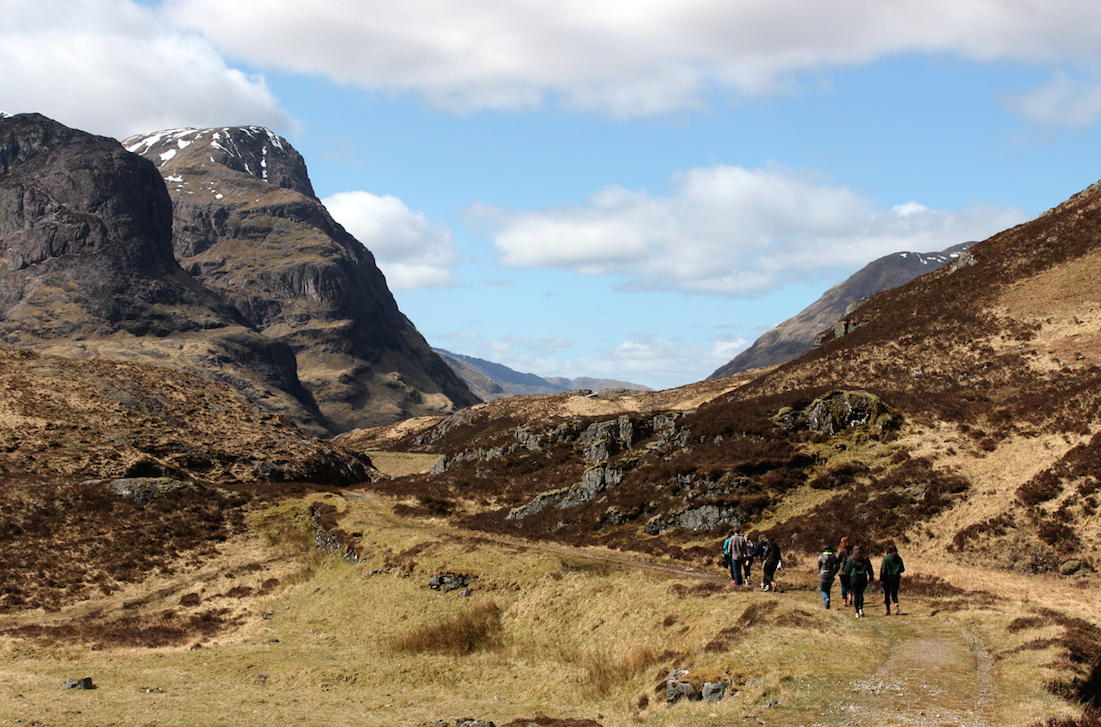 On the last day, we woke up early to go on a small fishing boat with Neil, the fisherman and caught scallops. It was a beautiful morning with the mist flowing over the mountains, leaving some uncovered for us to see. I got to skipper the boat for a little while as they set up the net to catch the scallops. When we pulled up the net there were crabs, a dogfish, starfish and scallops. I ate a raw scallop and although it was slimy it still tasted good and then Neil cooked the scallops and I had about 5 of those. Can you tell I love scallops? :) We arrived back on shore, packed up our bags and headed back on the bus for the last leg of the journey. We drove to the town of Fort Augustus to see Loch Ness. Loch Ness is a huge loch but we didn’t see the Loch Ness Monster. After traveling through the Cairngorm Mountains, our last stop of the tour was at the Hermitage, a peaceful place with hidden forest, water falls and a stone bridge. There was never a dull moment in the mini-van that Nory named Hamish, because he was always telling wonderfully entertaining and informative stories about the history of Scotland, with its many beautiful places we visited. He also had the best music selection for the journey. It was sad to say goodbye to Nory and come back after such an amazing weekend, but sometimes good things have to come to an end, though always cherished in our hearts and remembered forever.

"I Would Walk 500 Miles"
[Originally by the Proclaimers]