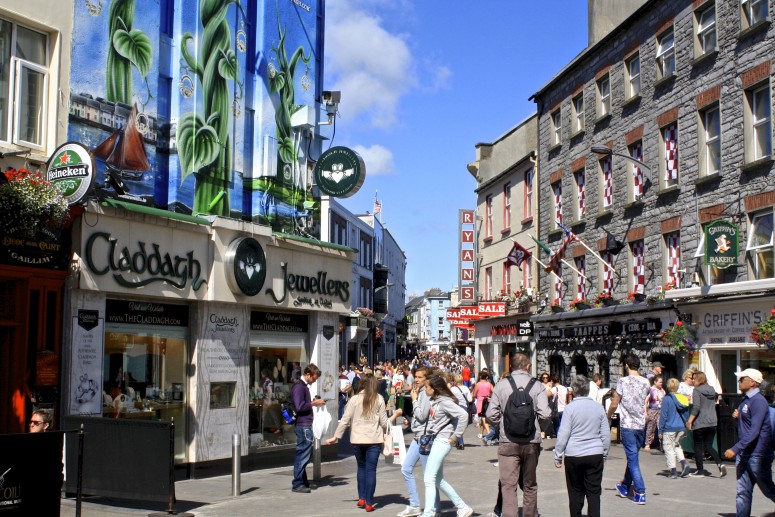 If you’ve been living under a rock, you might not know that the world reached a standstill in March 2020. And that we’ve all been evacuated back to the United States. So this, my final blog post, is written from the great state of Massachusetts, under quarantine in my childhood bedroom. So yeah- not where I thought I’d be on March 17th.

As we learned in Music, Gender, and Ireland- one of my favorite classes at NUIG- Ireland is a musical nation. I wrote my last paper in that class about the connection between Hibernia, the personification of Ireland, and the harp. In Ireland, I was surrounded by music; whether I was walking down Shop Street listening to buskers, or grabbing a pint in the pub, or just listening to the techno always pulsing from my living room. I don’t play any instruments, but I am almost always listening to music. On a walk to class, at the gym, doing homework, even if I’m just hanging out with friends, I’m always asking to put a favorite tune on.

I’ve been making playlists for every month since 2015. My Spotify is a curated reflection of my auditory habits, and by extension, my emotional state. They don’t really flow based on genre, or even mood, instead it’s just what I’m feeling at that moment. Of course, some months are more dominated by one genre or mood. June 2018 is a good one for longing, and November 2019 is great if you’re into ska. May 2015….we don’t talk about that one.

For my final post, I’m going to take you through an annotated, musical journey of the last two and a half months via my January, February, and March playlists. Some songs meant more than others- some just showed up on my recommended playlist, and others tell a meaningful story. The most important songs will have a snippet of my life at the time attached.

Until next time, Ireland. I’ll be back.

Tongues- The Frights
Cracklin Rosie- Neil Diamond
Let Her Dance- The Bobby Fuller Four
I forgot to download music to my phone for the plane ride to Ireland, so I was stuck with a few songs I had randomly saved. I was assigned to do a photography project based on a Wes Anderson movie in sophomore year of high school, and this was a song heavily featured in Fantastic Mr. Fox. I listened to it probably 15 times on the plane, and now it reminds me of flying over the Atlantic, wondering what my new life would look like.
Sweet Caroline- Neil Diamond
I added this song on the 11th. I had been in Ireland for a few days and was starting to feel a bit homesick, so I put this on and pretended I was back in Boston. That night, I went out to a pub with a few friends, and low and behold, the band started playing it! I sang and danced along with a group of locals, one of which I’m still in touch with. It felt like a sign that even 3,000 miles away, I could still find home.
Strawberry Blond- Mitski
Photograph- Ringo Star
I joined the Kingfisher gym on campus pretty quickly, and I loved all the classes offered. However, the actual workout space was pretty limited. I frequently did stretches and abs in Studio A with a million other sweaty NUIG students. They played an eclectic mix of music- typically techno remixes of 2009 pop songs. Except for one day, they played a horrible remix of Photograph that I could imagine being used as torture. I added the original to cleanse my palate on the walk home.
Deathless- Ibeyi, Kamasi Washington
We Can Work It Out- The Beatles
Ealu Weekend with Arcadia was a great retreat into the wilderness. I turned my phone off and tried to immerse myself as much as possible in the moment. Especially when we all got back to our townhouse on Saturday night and blasted old music, and boogied the night away! This is one of my favorite Beatles songs, and I’ll admit, I moved it up in the queue a few times.

Blue As My Name- Karl Blau
Silver Springs- Fleetwood Mac
My walk to Tesco every week was my meditation time. I took a few different routes, but my favorite was a detour through a small nature preserve alongside the highway. I loved seeing the different birds over the weeks, as we grew closer to spring. Silver Springs always makes me feel relaxed, and there's something about walking through the woods in the late afternoon, listening to Stevie Nicks's voice, wondering if there really is magic in these trees.
Falsetto- Chris Thile
Ready to Run- Dixie Chicks
“When the train rolls by, I’m gonna be ready this time…..ready to run” I’ve always been a flighty person. It’s hard for me to stay in one place for a long time. And even in Paris, of all places, I was still restless! I took a weeklong trip to the City of Love, and I had a magical time. I had actually been deciding between Galway and Paris for study abroad. While my trip was amazing, it made me realize I made the right choice of going to Ireland. After a week in Paris, I was certainly ready to run.
Only the Good Die Young- Billy Joel
Goodbye Earl- Dixie Chicks
Laid- James
After Paris, I had a mild cold that had me bedridden for a while. What did I do with all my roommates in Corrib for these few days? Watched endless Bachelor episodes and You on Netflix. The moment we were introduced to the character Love, she instantly reminded me of the girl described in this song. I binged the entire second season in my bedroom while sipping Lyons (tea) in the morning, and a warm Baileys at night.
You Can Call Me Al- Paul Simon
My Irish housemates loved this song. And when I say loved, I mean it came on the prinks (pre-drinks) playlist at least 5 times a night. This song was on the top of my most played list in 2019, so I welcomed the familiar tune! Really, who couldn’t get hyped up to a classic Paul Simon track? “Doesn’t speak the language, holds no currency, he is a foreign man” is a great call and response.

I Don’t Wanna Know- Fleetwood Mac
Restless Year- Ezra Furman
Why’d You Come in Here Looking Like That?- Dolly Parton
Panic- The Smiths
The Long Way Around- Dixie Chicks
“I Drank with the Irish, smoked with the hippies”.....the last few months have been heavy on the Dixie Chicks! Another song about wandering...at this point in the semester I was dreaming of April and traipsing around Europe with my new friends, and praying the coronavirus would stay away. While that obviously didn’t happen, it got me through a number of stressful nights in the library and the Corrib living room finishing essays. And during those last few nights, I spent in Galway, I certainly drank with the Irish.
But as they say- they’re taking the long way around.

I’m not spending the rest of this semester the way I dreamed of for so many years. And there's really no silver lining to the situation. Returning home wasn't the joyous occasion I imagined it would be in May. But these last two months will be forever in my heart, and Ireland is still out there. I'm just taking the long way around.