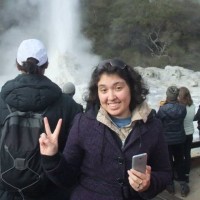 From one long-distance relationship (LDR) to another, so many different personal problems and issues can arise; in other words everyone's hardships are different when it comes to LDR.

In my case, the long-distance part of my LDR is the hardest. My boyfriend and I went from seeing each other everyday to physically not seeing each other at all. This posed problems for us because it made us both irritable and our irritability with each other... and caused some not so fun conversations.

To come right out with it, since I've been in New Zealand, my boyfriend and I have fought. A lot. Not to say that we had never fought when we were still in same state together, but going from arguing with one another from 3 feet away to arguing with one another 13,677 km and 16 hours time away, is hard. It's exhausting, and painful, and dissatisfying.

I think that's something to really understand as an LDR-er. Disagreeing from thousands of miles away is completely different from disagreeing only a couple feet away. A fight takes so much more energy and time thanks to distance. And frankly, that just makes the LDR all that more challenging.

My boyfriend and I, we fought so much only a month ago that we decided to take a break, and just cool off from one another. Meaning not talking and ultimately asking ourselves, whether or not it was worth continuing the relationship at all.

That, my friend, was hard. Considering that we had so many negative thoughts and feelings because we had been fighting so passionately already, coming to a conclusion on our relationship was extremely hard. Like the crying yourself to sleep, wishing terrible revenges, posting petty statuses on Facebook, and overall being lovesick for one of you best friends, whom you're not talking to anyway. It was tough. I will be the first to tell you LDR's and challenges that come with them are hard.

But, he and I, are still together.

We worked through our problems like any realistic couple does: clumsily and maybe not technically successfully. But we're still together. We want to be together, dare I say it in a blog, we love each other.

After coming so close to ending it then and there, we stuck it out, and are still happily together.

I'm not saying that the distance got any easier or that all of our problems are fixed. Because not seeing each other but a few times on skype, when we're both awake and not busy, and naturally finding things that we may not agree on as we still grow to know and learn about each other, is not going away.

But relationships aren't easy. If they were, everyone would be in them, and I wouldn't have to feel the need to write about it. LDR's are hard. But as someone currently in an LDR, I want to implore you to keep on keeping on, if you are also in one, or thinking of being in one. As long as you want to be in a relationship with someone and that someone wants to be in a relationship with you also you literally have all the tools to do so. It'll be hard, but if you're determined, it will stick.

So plain and simply, having a LDR is not all doomed from the start. And I want to preach that to hesitant couples because I'm sick of hearing people doom relationships from the start due to distance. Being in a relationship and loving someone is hard enough.

I wish I had some sort of easy fix to lay our here for any other couples in need, but I don't. But what I can offer, and for me, sometimes, is exactly what I want to hear, is that I understand how hard it is. I've gone through it and I know that feeling of despair when a relationship and an LDR is not going the way you want it to. I can be here as a fellow soldier in this battlefield called Love (thank you Pat Benatar) as someone who has seen the ravages of relationships, and as someone who agrees that Love is not always happy times and perfect sunshine. And no matter how my trip comes to an end, I stand my ideas.

And never forget that you are the only one who knows when enough is enough.