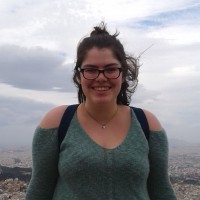 Oh man, I haven’t written anything in over a month!

To be honest so much has been happening that it’s been hard to find the time to sit down and write.

I think travel is the best part of studying in Europe. I know, I know, I spent a whole blog talking about how part of the experience is staying in the country that you are studying in to get the full experience. But, every one of those places (except for Rome) are all located in Greece. And I went to most of them with my classes!

The Athens on Site class took us all over the place. We went to the Academy of Plato, a Sanctuary of Aphrodite Pandemos, the ancient bridge of Thriassion that was used for festivals dedicated to Demeter and Persephone, the center of Eleusis which holds the cave where Persephone was taken into the Underworld, Marathon, the Straits of Salaminos - where the Athenian Navy completely destroyed the Persian Navy, and more. And we did it all in two days!

The Island of Syros was with the Modern Greek History: Conflicting Identities class. It was a really relaxing trip on a beautiful island. And they had Loukoumi! Loukoumi is the Greek version of Turkish Delight. It is pure sugar and a wonderful treat - as long as you don’t eat too much at once.

Next was Rome with friends. We only went for a weekend, but I would love to go back. We saw so many different sites and monuments. I had never realized that Beloit’s Classics program has a focus on Rome but there I was, attempting to translate Latin, seeing the art of events that I have learned about, walking inside of the Colosseum, it was amazing!

Delphi happened over a weekend trip as well. A three-hour bus ride was worth it to see the Temple of Apollo and the awesome museum. And Sounion was a full day excursion led by Arcadia that took us to the picturesque Temple of Poseidon. From the temple, it seems like the sea will go on forever.

And last, but not least, was Santorini and Crete. For Easter break a friend and I decided that we wanted to visit the islands. Santorini was beautiful, but it was super crowded; Crete was amazing as well. We went on a Land Rover tour that took us all over the island. We went to the small towns up in the mountains and tried the local olive oil and honey, went to a shepherd's house and tried handmade cheese, drove up one of the tallest mountains on the island, and then had an all-you-can-eat lunch full of traditional Greek dishes. And, since it was an island, the seafood was to die for.

The semester is coming to a close, and I head for home in two weeks. I do regret not doing some things, not exploring as much as I could have, or not going some places, but the trips that I did go on I will never forget.