My First Weekend as an Irish Lass 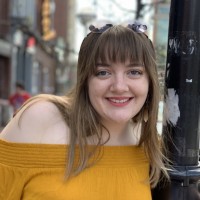 Hi again! I’ve been doing just grand this week. (Do you see that? I’m learning how to use their lingo!) Last week was a bit chaotic – learning how to navigate Dublin, moving into my apartment, and starting work in my pharmaceutical lab all within a few days. The fun thing about being in a foreign city is that everything you do feels like an adventure. Buying groceries? A group quest. Finding souvenirs for your family? A treasure hunt. One of us takes on the role of the navigator (usually me, Google Maps open on my phone), one is the leader (stepping onto the bus first and telling the driver where we’re going), one is the planner (keeping track of time), and the other is a peacekeeper (making sure we stay positive, even when we miss the bus). Okay, I might be exaggerating a bit – grocery shopping isn’t that exhilarating. But for a group of scared college students thousands of miles away from their families, successfully buying groceries is a proud moment.

Of course, we did more than grocery shop this week. On Saturday morning, we woke up early and took the bus into “city center.” We first went to the National Leprechaun Museum for a 45-minute tour. This museum was incredible, but not at all what we expected. The tour guide led us into different rooms and told us about Irish folklore throughout. In one room, we got to climb all over giant chairs and tables, demonstrating what the world would look like to a leprechaun. The guide explained that years ago, “storytellers” would travel the country, telling stories to families in every town. Parents and children loved hearing stories since many other forms of entertainment had yet to be created. The storytellers would first talk about the fairies. These were “real” creatures that lived underground in Ireland for years and were seen as the “bad guys,” stealing human babies and replacing them with their own. There were many different stories about fairies, but each with an unfortunate ending. At the end, the storytellers would tell tales of leprechauns to cheer up the children before bedtime. These stories often included a feisty leprechaun who played devious tricks on humans. Families loved hearing these stories because they always had a comical or happy ending.
After the museum, we stopped for a snack at a local coffee shop. Most coffee shops here are also bakeries, selling large assortments of pastries, breads, and sandwiches. Obviously, it was all amazing. Afterward, we walked up and down the downtown streets north of River Liffey. My favorite parts of the city have cobblestone roads and no driving allowed. These sections frequently have street performers, musicians, artists, and pop-up vendors. We explored the outside shops for a bit and found ourselves in an indoor mall, which was pretty similar to the malls back home.

After a few hours, we decided to head back to campus. At home, we made dinner, took short naps, and got ready to go back out for the night. A few of us took the bus back into the city center and went to The George; the biggest and oldest gay bar in Ireland. We bought drinks and stood around to watch the karaoke show. The show was great – the singers were wonderful, the drag queen hosts were hilarious, and the crowd was singing along to all the songs. Afterward, the stage was cleared, and people began dancing. We danced under the multicolored light for hours before waddling out of the club with sore feet and messy hair. We took a taxi back home, made some midnight snacks, and fell asleep around 2:30 am. Sunday, we all rolled out of bed late. After some lazy conversations and big breakfasts, a few of us decided to go to Dundrum – a large indoor/outdoor shopping mall south of the city. We bought coffees (a necessity after a night out), some souvenirs, and a few more groceries.

Back at home that evening, we had an impromptu apartment meeting about our upcoming weekends. We made loose plans regarding future day trips and a weekend trip to London. We also bought tickets to visit Cork next Saturday and explore the Blarney Castles & Gardens. After this important conversation, we sat around drinking wine and playing card games until bedtime.

Overall, I had an amazing weekend. The great thing about being here eight weeks is that I don’t feel rushed. When I’m on vacation, I feel like I have to pack every fun thing into just a few days. But I know that I have over sixty days to explore Ireland at my own pace. As I begin my second week here in Ireland, I feel more at home. I’m comfortable getting around, making meals, and forming relationships with the locals. I’m super excited about all that I have planned for the rest of the month, and I can’t wait to share it with you!