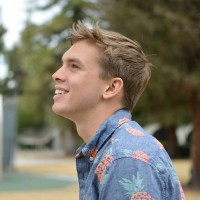 After getting to explore and hike around Auckland from 6 in the morning (when we landed) to 8 pm that night. After going to the wonderful, sulfur smelling and thermal infested area of Rotorua. After going to a recreated Maori Village and get to participate in their powhiri, enjoy their hangi, and learn about their culture in multiple different ways. And after getting to see a farm show, go zorbing, and (sadly) leave some friends for a bit, I FINALLY got to fly to the wonderful city of Wellington!

I’ve been in the “coolest little capital in the world” for about 3 and a half weeks now and I’m loving it so far! It’s really easy to get outside of the city to enjoy the nature of NZ, but it’s also really easy to stay in it and enjoy it as well. The weather has been amazing since we arrived, however people do keep saying that it’s going to get worse and start raining horizontally because it’s not called Windy Welly for nothing. But so far, minus 3 days, it’s been sunny or cloudy and relatively warm.

There are honestly views at every turn in this city and country. You can do an hour hike (no transportation needed – just walk from your flat) to the Mt. Vic summit at sunset and get to see all of the harbor and all of the city. Or you can take a 20-minute Uber ride (or take the bus or even do the day hike there) to go see Red Rock Reserve to see seals and black sand beaches. And you could even just walk down to the harbor on a good day and get to look out at Matiu/Somes Island and out towards Petone. Wellington is honestly just gorgeous.

I’ve learned about some good restaurants and cafés: Thunderbird Café, Kaffee Eis, and Abrakebabra. And I’ve learned quite a lot of kiwi slang – like saying "sweet as" to say "cool" or saying "cheers" instead of "thank you". I’ve also learned so much already about the native people of NZ – the Māori. I now know what a hangi and a hongi are, how to say left (mahue) and right (matau), and know aspects of how they lived before European contact. I’ve also met and become friends with some incredible people from all over the world.

From learning about cultures other than my own, to gaining more independence and confidence, and to making great friendships thus far, studying abroad is quickly turning into one of the greatest things that I have chosen to do in my life thus far and I suggest that anyone who has the ability to do so, does it.