Admittedly, I haven’t had much motivation to write this post, nor do many of my tutorial responsibilities. My mind has been preoccupied with the election and waiting for the results, in addition to the news that England will be shut down for essentially the rest of my time here. Before the latter news, I actually planned my first trip to London. I was going to go again on the day after election day, but warnings about a potential terrorist attack stopped me. With this context, this blog will be about my first and, for now, last time in London and last trip in the U.K (whooooo)!

It took me until my 50th day in the U.K to travel to London because I was hoping to go with others, but that didn’t work out, so I went by myself! Although I knew that I wouldn’t get to see everything I wanted due to time restrictions and the pandemic, I planned what I could see: Buckingham Palace, Big Ben (though I knew it was under construction), the London Eye, Parliament, and the Victoria and Albert (V&A) Museum. I found out that I could take the Oxford Tube (a bus, or “coach” as they call it) from Gloucester—side note: it is not pronounced how I thought it was and no one told me until about my tenth time saying it—Green Station in Oxford to Victoria Station in London; the ride lasted about an hour and forty minutes and only cost £13 total. I looked up a good route on Google Maps and found out that the walking distances were within my comfort zone. My number one advice is to print off your route and the directions to get to each location, especially if you are like me and don’t have an international data plan!! Your phone might betray you, and I think it’s worth doing even if it’s just a backup option. Also, make sure to tell someone where you will be—whether that is just Arcadia, a friend in the U.K, or your loved ones at home (though you should tell your family)—in case something happens, especially if you are traveling alone like I did.

I got on the Oxford Tube at 7:05am and got to Victoria Station around 8:45am. I picked a good day to go; although it was overcast, it only misted for a little bit and it was a good temperature. Though I thought I was as prepared as I could be, I had forgotten to enter in my first stop, Parliament, into Google Maps before I lost the free bus WIFI. This meant that I wandered around for a while (read: I was lost) before I remembered that I could use a city map on the street in addition to my printed-out directions. I stumbled upon Parliament (without really knowing what it should look like), and then Big Ben and the London Eye. Though I was bummed that so much was under construction, I thought it was super cool and I was really impressed with how big the Thames was there, so I took a lot of pictures of the river. I even saw two men wearing kilts and playing the bagpipes, which was cool! Then, I figured out how to go to Buckingham Palace and asked someone for direction help. I wasn’t sure what it looked like either, and I wasn’t especially impressed. I did think the guards were interesting, but I wish I could have toured parts of the inside. Near there, I found bathrooms in a park that cost 20p to enter, which was very strange; someone actually let me in, though, so I could avoid paying! The hardest part was getting to the V&A Museum, but with the help of many strangers, I made it in time for my pre-booked slot. I highly recommend this museum, especially the fashion area. Even though I was tired, I stayed until it got dark and unfortunately had to walk back to the bus station alone. For this part, I relied on the app “maps.me;” it does not require WIFI to work (I also recommend having several map apps). I stopped in a few shops on the way and very nervously navigated London at night. An older couple helped walk me to the station and asked a security guard to show me where my bus would come, which was so incredibly nice! I was very glad to arrive back in Oxford at the end of the long day.

I had great timing going to London before the lockdown, and I am really proud that I did it by myself. I wish I could have gone again (especially since I have an unused ticket sitting in my account), but I ended up using the day finishing up shopping in Oxford, being absolutely glued to the news, and needing the time for myself. I suppose that’s another important lesson: times change very quickly and at least I got to do one thing I wanted to do in this pandemic time of studying abroad. Also, even if you don’t have the experience of living in big cities, you may still be able to travel to a major international city by yourself! So many people can help you navigate and many museums have WIFI for you to use if you get lost. If you’re not comfortable, remember that there are so many things to see in Oxford, too. I decided to pay £2.50 to see the Divinity School in the Old Bodleian Library yesterday (parts of Harry Potter were filmed there!!), and it was just as cool as seeing the London Eye. Now, I’ll have another super fun thing to check off on my list of study abroad experiences—being in Oxford for a month of an England-wide lockdown! 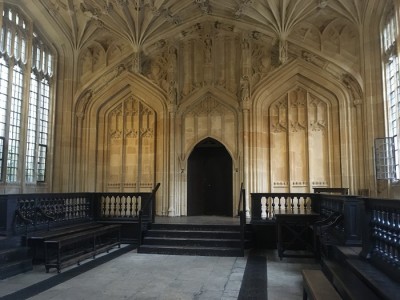