Learning How to Breathe: On Adapting to City Life 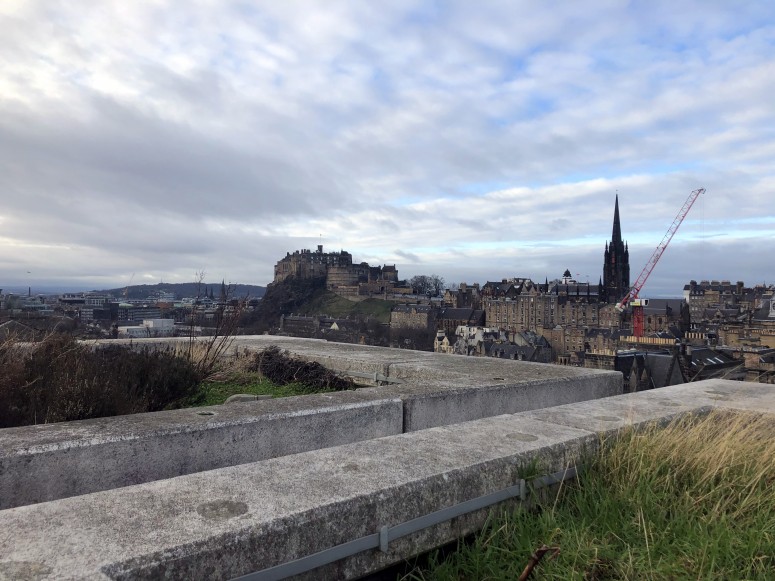 It took me three weeks of living in Edinburgh before I felt like I could breathe. The air quality is fine, good, even; it’s a green city, nowhere near as compact or polluted as other cities I’ve been to; the skylines, dotted with towers and castles, are magnificent and aesthetically engaging. And yet, I felt suffocated by (beautiful, historic) facades, choked by (quaint, welcoming) storefronts, and strangled by (charming, European) cobblestone streets.

It happened slowly. In the excitement of everything new after arriving in Scotland, I didn’t realize I was being starved of light and open sky and stillness. These treasures are ubiquitous, commonplace, in the rural Vermont town I’m coming from, but much harder to stumble upon in a city, even if Edinburgh is better than most.

That first time I took a full breath was also when I realized I hadn’t been breathing. On the hidden rooftop terrace garden of the National Museum of Scotland, accessed by a disjointed series of winding staircases, I no longer felt trapped. My lungs could expand. I could expand. I felt free.

I could see King Arthur’s seat to one side. The Pentlands, on another, reminded me of the mountains in Vermont that feel like home. Edinburgh Castle was visible, as always, in front of me, but now we were equals: it sat near eye level, no longer nearly as formidable as when it towers above. I could still hear the unceasing sound of modern city that seems almost in conflict with Edinburgh’s appearance, but the thrum was muted, so far below.

It was hard to walk back down to the street. But the breaths I’d taken while stationed so high had been deep and low, and I felt they could sustain me now that I remembered I had to breathe every once in a while, now that I knew to look for new sources of air. The next day, I set out to explore Holyrood Park, the area of land I can see from my flat window that contains the majestic King Arthur’s Seat. It had always seemed inaccessible, with buildings and unquantifiable amounts of city in the way. I discovered after setting out that it was within a few minutes’ walk. I arrived and I stood beside trees for the first time since I’d left home. I basked in the full sunlight that hit me through the shadows of the branches, somehow making Scottish January feel like spring. I took another breath.

I began to seek these air pockets regularly, and always grateful to find them in unexpected places. A week later, I breathed in a hidden garden above the Grassmarket, an oasis ensconced within closely clustered buildings on a balcony that touched the sky. A few weeks after that, I was delighted to find that even the busy street outside my flat became delicate and still at the right hour in the early morning.

As months have worn on, I’ve realized I can last longer and longer between such sources of breath. I don’t find myself lacking in silence or oxygen as I walk down the Royal Mile; I’ve learned that some of each is hidden even within the packed real estate and city thrum. The buildings are no longer quite so suffocating; the cobblestone streets are now simply charming. I’ve even learned to enjoy walking through the cramped and winding closes and winds so typical of Scotland and so unlike anything I’ve seen at home.

I’m sure that when I return, the rural Vermont air will be delicious, filled with nothing but the sounds of nature and lifted up by the openness of the sky. But I’m no longer quite so desperate to return home, now that I’ve learned to breathe within the city.