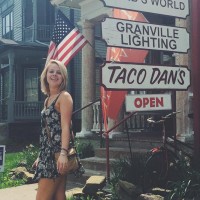 The past few weeks have been a flurry of homework, celebrations, and exploring the beautiful Scottish highlands. Two weekends ago, I traveled up to Killin with my Arcadia program. This tiny Highland town is home to the University of Edinburgh’s Outdoor Center, where we spent our weekend. The Outdoor Center itself is a modestly sized cabin sitting right on the banks of the beautiful Loch Tay. As we unpacked our bags in the cabin rooms (complete with wooden bunk beds!), the Outdoor Center felt similar to sleepaway camp. That Saturday morning, we all woke up bright and early to hike the nearby mountains. What our instructors said would be a “mild walk” turned into an exhausting 11-mile hike up an enormous, snow-covered mountain. We stopped for a packed lunch at the pass at the top, which overlooked a frozen loch. Then, we hiked down the other side of the mountain, admiring the Scottish blackface sheep scattered across the hills. When we returned to the Outdoor Center, we spent the evening enjoying a traditional Burns Supper and ceilidh – complete with a bagpiper. For those of you who don’t know, a ceilidh is, “A traditional Gaelic social gathering, which usually involves playing Gaelic folk music and dancing” (Thank you Wikipedia). For someone who hates dancing, I actually really enjoyed the Saturday night ceilidh. We woke up early again on Sunday morning, and had our choice of activity. I chose to go kayaking on Loch Tay, which was absolutely stunning. A group of us paddled around the loch at a leaisurely pace, soaking in the beautiful mountain ranges and wildlife surrounding us. After biking around the town of Killin in the afternoon, we finally headed back to Edinburgh. The trip overall was completely exhausting, but one of my favorite weekends in Scotland so far!

Last week was also full of excitement. I got to celebrate my 21st birthday in Edinburgh, which, although somewhat anticlimactic, ended up being a great night with my friends. We enjoyed some Mexican food – a rarity in Scotland – and checked out SKYbar, a venue open only once a month that has great views of the city.

After Thursday’s successful birthday celebration, we decided to go on a highland tour on Saturday. I had heard great things about the Hairy Coo tours company, which offers free tours of the Scottish Highlands, so we decided to book one. The tour took us to several notable places in the Scottish Highlands – Wallace Monument, Stirling, Doune Castle – but my favorite part, hands down, was feeding the “hairy coos”. The Highland cattle look nothing like the cows I’m used to in Ohio, and were completely adorable. We fed them slices of bread while attempting not to get impaled by their giant horns, and took about a million pictures of them. While the tour itself was great, I have to say, the Hairy Coo’s definitely stole the show.

Until next week – Cheers!