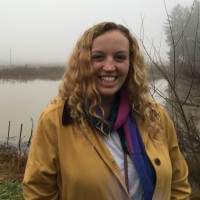 I have been looking forward to visiting Madrid ever since I found out I was going to study abroad in Spain. Arcadia organized a weekend field trip to Madrid and Toledo in early April. We boarded the bus early in the morning and headed towards Madrid. Our first activity was a tour of the Royal Palace (Palacio Real de Madrid). The Spanish Royal Family does not live there anymore, but the palace is used for government ceremonies and events. Our tour guide took us through the palace to see beautiful paintings and the elaborate decorations. It was much more elegant and fancy than I expected. After the Royal Palace tour, we had free time. A few of us checked out the Santa María la Real de La Almudena Cathedral, which was the most modern looking cathedral I have visited in Spain. The style was Neo-Gothic, unlike any other here. We also checked out the indoor fresh food market in Madrid. I found a mozzarella stand and ate the best cheese!

The next day, we had a picnic lunch and free time before our guided tour of the Prado Museum (Museo del Prado), which is one of the most visited sites in the world! It was really neat to see pieces of art that I had studied in classes before. We saw pieces from the famous artists Diego Velázquez, El Greco, and Francisco de Goya. We headed to nearby Toledo, a city perched on the top of a mountain. We had to take multiple escalators just to enter the city from ground level (never thought I would be doing that!) On our tour, we learned that Toledo has a history of co-existence of Christians, Muslims, and Jewish people. We learned about the importance of metal-working and sword making to the economy dating back to the Roman times. Later that evening, we shared a delicious dinner with the Arcadia in Toledo students and talked about our programs and respective cities. I had a fun and interesting weekend in two new cities!