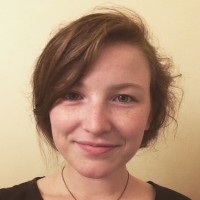 I’ve been traveling for the last two weekends and while I loved every minute of it, I am thoroughly exhausted! With two friends, I traveled first to Chiloé in the south and then to the Elqui Valley in the north. The two places have very different climates and things to see so I really enjoyed getting to know these different parts of Chile.

Our first weekend trip was to Chiloé, an island in the south of Chile. After classes on Thursday, we set out on a 16-hour overnight bus. We woke up to a little girl waving out the window and shouting “Chao vacas!” (Bye cows!) every time we passed a cow outside (approximately every 2 minutes). This quickly became the quote of the weekend and we used it as often as possible.

To get to the island, the bus had to get on a ferry that would take us from Puerto Montt to northern Chiloé. During the ferry ride, we saw sea lions and penguins - a great start to our trip! Three and a half hours later, we arrived in Castro, the capital of the island. With Castro as our base for the weekend, we explored other cities and smaller islands around Chiloé. Chiloé is famous for its unique churches (16 of which are UNESCO World Heritage Sites), excellent seafood, palafitos (houses on stilts in the water), and picturesque landscapes. It was great to be surrounded by the green of the island after living in the city for months.

May is one of the rainiest months for southern Chile and we knew that when we planned this trip, but it still made traveling difficult and exhausting. We were blessed with a sunny Sunday so we visited Quemchi, a port town north of Castro. There we explored the town, learned how to make empanadas from a restaurant owner, and walked across a long bridge that connects Quemchi to a tiny island in the bay. The island is called Isla de las Almas Navegantes and on the island, there is only a church, a cemetery, and a small botanical garden. It was very serene and a great representation of the culture of Chiloé.

The next weekend, we traveled north to La Serena and Vicuña in the Elqui Valley. We stayed with the “host aunt” of one of my friends, who welcomed us into her home, fed us, and stayed up late talking with us. We explored the beach, markets, and city of La Serena and then stayed in Vicuña for the last two days. In Vicuña, we watched a regional cueca competition, which is the national dance of Chile, biked through the Elqui Valley, and toured a pisquera, where they make pisco, a brandy common in Chile and Peru.

We also traveled outside of the city one night to get a look at the stars. This region is famous for its incredible views of the sky and there are a lot of observatories in the area. I saw more stars than I’ve ever seen in my life (not hard to do because I live in a city where you can see a max of 20 stars at night) and it was such a cool experience! We used a giant telescope to see the tiny moons of Jupiter and we could see the Milky Way and many constellations without a telescope. A lot of the constellations were new to me because they are different from the ones in the northern hemisphere. We couldn’t see the Big/Little Dippers and Orion’s Belt faced a different direction than what we see in the northern hemisphere. It was great to get a different perspective on the stars, which I often think of as being the same anywhere you go. I can’t wait to see even more when I travel to San Pedro de Atacama next week!

**Tip: Buses are the cheapest and easiest form of transportation in Chile when the distances aren’t too large. Between the two weekends, my friends and I took a total of 14 bus rides. Some were overnight buses to leave and return to Valparaíso, and others were micro rides between the towns and cities we traveled to. Buses are usually very easy to take and any time I have any doubts, there’s also someone who will answer my questions and help me out!