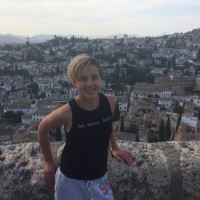 Without ever really knowing about Spain, one of the images that probably comes to mind is a dancing woman in a dress, carrying either a fan or castañuelas. This dance is called Flamenco, a muse for Leonard Cohen, and dubbed an Intangible Heritage of Humanity by UNESCO in 2010.

During the program, there are school sponsored cultural immersion events that you can go to like cooking classes and festivals. The centro de lenguas modernas brought us to a gypsy cave that was later converted into a theater for Flamenco Concerts. The tradition of Flamenco in Spain originated in the Andalucia region, where Granada is. The dances are said to originate from Punjab, India, and can be categorized into subtypes of dance (Las bulerias, la solea, la saeta, el martinete, los fandangos). The main Palos de Flamenco are a singer (cantaor/a), guitarist, and dancer (bailoar/a). There are also different rhythms that bailoares dance to, but they are usually broken up like this: