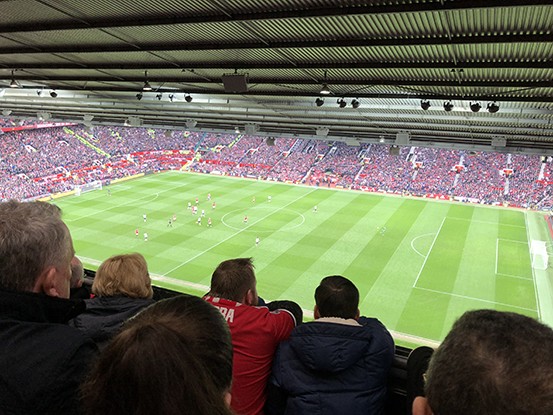 Some people believe that you can tell a lot about a city or town by its sports team and its fans. Never has that theory been more true than with the rivalry between Manchester United and Liverpool.

The rivalry is said to have started when Manchester built the ship canal that allowed for merchants to import and export goods past Liverpool and in Manchester instead. Through the years they’ve battled for the title of being the European capital of culture and for best music, but the hate is most prevalent on the football pitch.

This past Saturday marked the 200th meeting between the two mega clubs in what is dubbed as the best rivalry in all of the sport. And for just £32, I was able to watch the spectacle live.

One really can’t appreciate the working class nature and ever expanding culture of Manchester until they visit it and see the IT companies that have occupied old factory buildings. As for the people, they were as passionate and proud as they come. Swarming around Old Trafford in a buzzing sense of unity the best supporters in the world were in full voice hours before the match had even kicked off.

As I walked through the turnstiles I walked myself up about 8 flights of stairs— when you get a ticket for a derby game like this for as cheap as I did, you can’t expect front row seats. In my seat I was surrounded by people of all ages who had clearly seen their fair share of games, but they were all there for the same reason.

The second the ball was kicked off a massive roar erupted across the historic stadium and didn’t stop for the next 2 hours. Then my ears bled.

After having been to hundreds of sporting events and plenty of concerts, I can firmly say that I never experienced anything more loud or exhilarating than when Rashford scored his first goal. Grown men jumping over each other, hugging the man next to me who I had only known for 15 minutes; it was pure emotion.

Not only was it a great piece of skill, but it came from the boy born and raised in Manchester! And although he’s been in the first team since February of 2016 he really is a boy still at just 20 years of age (only 2 months older than me!).

It didn’t stop there, however. The wonder kid scored once again and set the world alight. Manic celebrations followed, this time with everyone in louder voice after the goal as the lead became more comfortable.

The game finished in a 2-1 Manchester United victory following a tense last 24 minutes after an Eric Bailey own goal made the lead only one, but the tale of the tape was the local boy once again scoring in a derby match. Even in the modern age of the sport with transfer fees skyrocketing as high as $200 million and players earning more in a week than the average middle class citizen, this 20-year-old is proof that the reason everyone fell in love with the game is still alive.

There is still that possibility that a local kid can go through the system of his favorite club and score game winning goals against its biggest rivals. He can celebrate with those fans because he is still one of them. And he’s only 20.