“Because We Come From Everywhere We All Come From Away”: Balancing Self-Care and Making the Most of my Final Weeks in the UK. 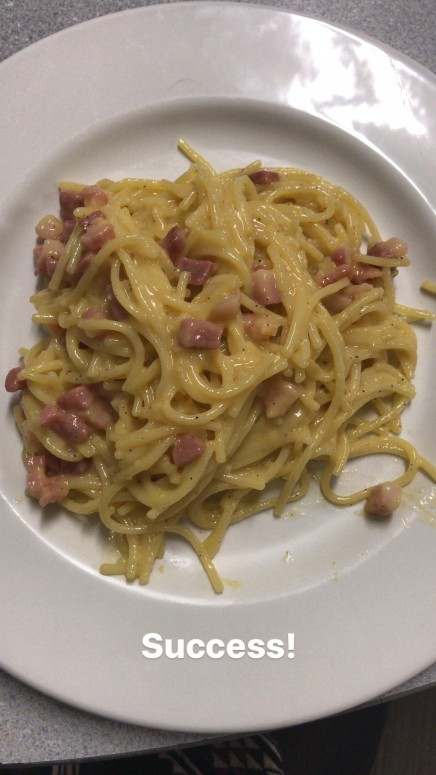 I can’t so much as think “I have less than two weeks before I leave” without wanting to cry.

Despite some difficulties adjusting in the beginning, I’ve grown to absolutely love Goldsmiths and London. I love the work I’m doing in my classes (modules, as we say in the UK), I love exploring the city when I have the time, I love all of the activities the Students’ Union has to offer, but most of all, I love getting to know the wonderful people I’ve met whom I’ve come to call my friends. These lovely, amazing people come from all over the world: England, Italy, Somalia, Korea, Japan...you know, places that aren’t exactly the easiest to get to from my small hometown in Connecticut. The “easiest” friend for me to visit is from Washington state in the US, which is still 6 1⁄2 hours by plane.

I feel so pressed for time because I need to stay on top of my coursework, but I also want to spend as much time as I can with my friends because I have no idea when I’ll see them again in person. On top of all that, I need alone time for myself to recharge in between classes and being social or I have sensory overload because being in public spaces for long periods of time can be really exhausting for me. Throughout the past week, I’ve found myself feeling guilty whenever I’m alone because I start to think that the time I’m spending by myself could be spent seeing the city or in the company of friends, or both. I’m often frustrated by my own lack of social stamina, but paradoxically afraid to reach out to people because I don’t want them to think I’m that I’m always sad and only view them as a therapist or an emotional punching bag. I’m stuck between my need for self-care and my desire to be social. 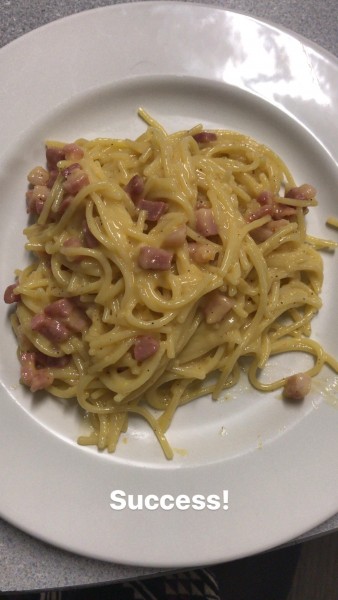 As much as this conundrum is weighing heavily on my mind, I tell myself that combining two of my three needs (schoolwork, self-care, and friends) is possible. I made spaghetti carbonara for the first time a couple
of weeks ago and asked one of my friends if she wanted to come over and help me. She was on spaghetti duty while I fried the pancetta, we tag-teamed to mix the sauce with the pasta (carbonara sauce is Parmigiano-Reggiano cheese and raw eggs, and only the residual heat from the spaghetti will cook the eggs, so you have to constantly mix it for a few minutes so you don’t end up with spaghetti and scrambled eggs) and we both got a delicious dinner out of it.

(Image description: spaghetti carbonara on a white plate with “Success!” written in bold white letters on the bottom. From my Instagram)

I’m also writing a paper in one of my modules about finding ways to preserve cultural heritage, and there’s an exhibit at the Imperial War Museum (IWM) called “War on Culture,” which is about how the IWM preserved the works in the museum during World War II, and how culture is attacked in other nations and the race to save it. I asked one of my friends if he was interested in seeing the exhibit with me, and we arranged a time to meet at the museum last week, and I got some great research material for my paper, and a few hours of really great conversations with him.

I was talking about my inner conflict between self-care and socializing to an acquaintance earlier this week, and they asked if self-care makes me feel better. I replied yes. They responded by saying that if I’m taking care of myself and feeling my best, then I’ll be at my best when I’m with my friends, and it will be a better experience for everyone involved. After a few moments, their words sunk in. I’m insecure about coming off as a depressing friend who’s constantly exhausted, but when I’m fully rested and recharged, I’m my usual optimistic, upbeat and pun-making self-the person I want to be around my friends, whom I don’t have a lot of time left with in person.

“Because we come from everywhere we all come from away” is a line in the final song from my favorite musical, Come From Away. It’s the true story of how 38 flights were diverted to an airport next to the tiny town of Gander in Newfoundland, Canada after US airspace was closed following the September 11th terrorist attacks on the World Trade Center. The show is about the relationships that developed between the townspeople and the 7,000 passengers that were stranded there for five days. The “plane people”, as they were called by the Gander townsfolk, came from all over the world, and on the tenth anniversary of 9/11, many of them flew back to Gander to “remember what was lost, but we also commemorate what we found.” It’s a beautiful show with fantastic music unlike anything you’ve ever heard, and you should all see it, or at least listen to the soundtrack.

My new friends come from all over, but that doesn’t mean we have to be apart. I’m already Facebook friends with most of them, and have their numbers on WhatsApp, so staying in touch isn’t going to be a problem. Yes, my time here is short. Yes, I don’t know when I’ll see these people again in person. Yes, I’m sad about that fact, but I try to remind myself that being apart for long periods of time will make seeing them in person all the more special.

To the new friends I’ve made at Goldsmiths who are reading this (you know who you are): in the words (err, lyrics) of the finale of Come From Away, “To the ones who’ve left, you’re never truly gone. A candle is in the window, and the kettle’s always on.”