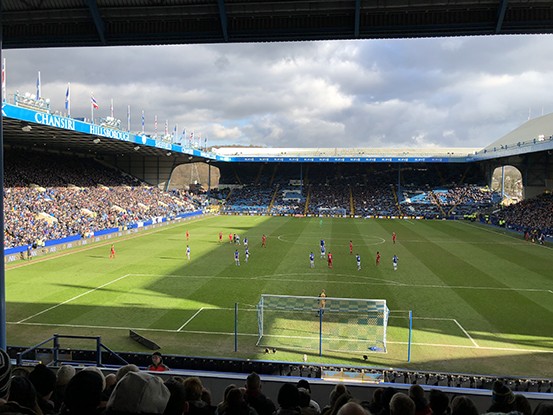 Waking up at 4 a.m. in 35 degree weather just to get on a 4 hour bus ride is not the ideal Saturday morning. But when it means you’re going to see a match in soccer’s oldest competition at one of England’s most historic stadiums… it kind of makes it worth it.

Swansea City were playing Sheffield Wednesday in the 5th round of the English FA Cup at Hillsborough Stadium, and myself and two other Americans decided to ride the coach from Swansea with the rest of the Jack Army.

The Jack Army, like many other supporters groups, is the most passionate group of Swansea supporters who attend every game-- even when it’s a trek as long as this. Whether they have work the next morning or have to sacrifice their rainy day fund these fans are always there. If there was ever a heartbeat of a club it would be the supporters groups.

We set out on the road before the sun even rose and the journey started in the hills of South Wales. Although I was tired from a short sleep the previous night, I couldn’t help but admire the passing scenery outside the coach window. Rolling foothills and seemingly endless forest slowly changed into flatter planes and farms.

We passed by working class towns like Newport with the factories running in the early morning and the midlands of Nottingham by midday. We arrived in Sheffield a couple hours ahead of kickoff, just as the city was buzzing with match day excitement.

After grabbing a traditional British steak pie and making the way to our seats, I found myself in a stadium that hosted FIFA World Cup and UEFA Euro matches as well as some of English soccer’s greatest matches; a stadium where you could feel the history as you passed through the turnstiles.

George Orwell once wrote that “Sheffield, I suppose, could justly claim to be called the ugliest town in the Old World.” I think he would have found the match itself to be pretty similar.

A 0-0 conservative draw that was far different from the 8-1 smashing I had saw in the previous round in Swansea. Nevertheless, the atmosphere remained enthralling and I couldn’t help but soak in the moment of being at a place that previously only existed through my television screen.

Although I sat enthralled, at the end of the match I wasn’t quite ready to go. But as quick as we got off the coach we were right back on and only making a stop for dinner.

It was a quick Saturday trip, but I had seen more of the U.K. in the span of 11 hours than I had before then. I also didn’t have to spend more than $38 on the bus or match ticket.

I guess that’s why it has always been the working man’s game, and I’m not going to argue with that.