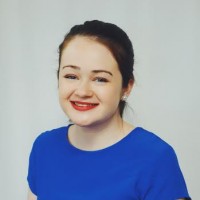 As I was beginning to plan for my journey to Ireland, Arcadia announced that they would be holding weekend excursions to Northern Ireland and Scotland.  Eager to travel to as many places as possible, I signed up as soon as I could.  The first excursion out of the pair was Northern Ireland.  The weekend was packed with a trip to the Antrim Coast, home of Giant’s Causeway, free time in the city, a visit to the Titanic museum, lectures about the Troubles, and a guided tour of Belfast.

We left Dublin in the afternoon and headed straight to the Titanic museum.  The museum is regarded as one of the top tourist destination in Europe.  It was definitely not what I expected, for it took you throughout the whole story of the ship, beginning with the building of the Titanic.  There’s even a small ride in the museum showing you the process of building it.  However, when you get to the part about the ship sinking, it gets a bit heavy.  They have voices of survivors and telegraphs from the actual ship, which I was not expecting.  All of the sudden the wreckage became more personal, I even found someone that died on the ship with my last name!  The Titanic museum is definitely something you should see if you ever stop in Belfast in your journeys.

The next day we embarked for the part of the trip I was most excited to get to, Giant’s Causeway.  Along the way, we had a tour guide pointing out different site on the outskirts of Belfast, and explaining the folklore of Giant’s Causeway.  Basically, the stones at Giant’s Causeway are remnants of a bridge left by a Scottish giant who attempted to fight Finn McCool.  We were lucky enough to have clear skies, a rare occasion in Ireland, as we were exploring the causeway.  The scenery was simply amazing, something I’ll never forget.  On the way back from the causeway, we stopped at a few locations that have been used in the filming of Game of Thrones, my absolute favorite television show.  When we returned to Belfast, we were allotted some free time to explore the city on our own.  Of course, I ventured to some of the bars that were recommended by the locals.  Since it was a weekend, the bars were slightly more quiet, and filled with an older crowd.  It did not stop us from having fun though, we danced and met new people.

Our final day in the north started with a lecture on murals in Belfast, most of which were inspired by the Troubles.  They were extremes from both ends of the Troubles, but the one that stood out to me the most was an extremist Protestant mural that had the name of Catholics living on a street that had not been killed yet.  Later on in the day, we were taken to see some of the murals throughout the city.  The murals depicted many heroes of different social justice movements, not just in Ireland, but around the world.  It was a great way to wrap up our trip, for it really helped our group understand how the Troubles affected Belfast.