A Weekend in Normandy 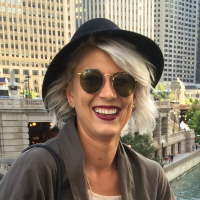 Tell them of us, and say "For your tomorrow, We gave our today.​"

Like many Americans, I have deep roots within the war. My great uncle Gerald flew into France as a young boy upon one of America’s flimsy gliders. These wooden planes were towed in behind C-47’s and were incorporated with terrible tragedies killing soldiers before they even had the chance to fight. Fortunately, my uncle was able to land in a field where he described seeing mud coming into the plane through the floorboards that were destroyed on landing. My uncle managed to make it through the war but he never managed to make it passed the terrible images and experiences he was exposed to. He spent much of his life suffering from nightmares and PTSD from the war and after witnessing what he flew in on, I will never be able to fully grasp the terrifying experiences he was tossed into. I sympathize with anyone involved with war, it’s truly an unhealed wound on the youth of that time.

Many soldiers weren't nearly as lucky as my great uncle. Claiming Omaha Beach, a two mile stretch of sand was far from easy. With heavy German shelling raining down from the cliffs facing the beach, soldiers faced a difficult task of racing across a mine covered beach under opposing fire. Once they managed to make it across the beach they then had to run uphill to the German bunkers, nearly 100 meters above the beach. The American ships brought in amphibious tanks but the weather on D-Day was far from what they had intended for. Vicious waves sunk 33 of the 36 tanks that were driven into the water that day.

Lives were lost not only by German fire but by drowning in the unforgiving weather conditions. With 5 soldiers manning each tank and hundreds more invading at the same time, it’s hard to begin to grasp how many young men gave their lives for freedom. Today the tanks still sit at the bottom of the sea as a monument to what happened on that tragic day of June 6th 1944. The French choose not to swim in the waters of Omaha Beach out of respect for the many lives lost in their liberation from Germany's death grip.

The Rain of War

At Pointe Du Hoc, nearly 100 meters high, American rangers scaled a cliff around 7am in under 15 minutes. With German soldiers standing atop the cliff, oftentimes cutting the ropes of the rangers, many climbed the cliff by use of bayonet knives, heaving themselves and their packs up a nearly vertical wall of rock. The rangers landed here with the hopes of taking out the German bunkers and cannons that sat pointed at Omaha beach. They were successful but suffered great losses. The coast had been bombed prior to that point leaving it scared with deep bomb craters but the bombing was unsuccessful at taking out any of the German artillery. Many lives were lost on this mission. The atmosphere rests heavy on it’s visitors, despite the scenery, it's hard to look passed the young soldiers whose last view was the rain of German shells over the cliffside.

If I could find the words to describe the feeling of walking between thousands of marble crosses, marking the lives of those lost fighting for my freedom, I’d leave them here for you. I find myself thinking back to the moment my eyes first met the acres of graves marking many kids my own age who valiantly fought against forces I could never fathom. It’s hard to imagine having the strength to move on against the sounds of foreign shelling accompanied by the screams of the fallen. Nothing in my wildest imagination will ever coincide with the thoughts of these young men who protected our homeland and selflessly fought for the homelands of many others. I fight to find an explanation for the tragedy that is war but I know I’ll never be able to explain what I felt, what they felt.

Courtesy of my grandparents coming to visit, I managed to land myself a seat in the van for my families cross country drive to France over the weekend. Regardless of the cramped drive, when we made it to the country side it was all worth the sweat, complaints and stressful backseat driving. We stayed in the port village of Bessin and had a beautiful view of the English Channel. Such a lovely get away from the hectic city lifestyle I’ve grown so accustomed to.