A Visit to Stirling Castle 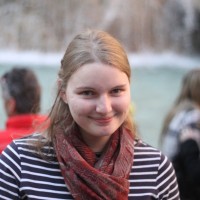 After a crazy week of writing and submitting essays, and existing on very little sleep, I decided to celebrate with a day trip to Stirling, to visit Stirling Castle. It has a long and rich history in Scotland, and much like Edinburgh Castle, sits at the top of an intimidating hill and is surrounded by cliffs on three sides.

It’s a beautiful building, which reminded me a lot of Game of Thrones’ Winterfell (which is honestly the dreamiest castle in fiction). The surviving buildings were largely built in the 15th and 16th centuries, and it was home to the coronation of Mary, Queen of Scots in 1542. During the Wars of Scottish Independence, it changed hands between the Scottish and British forces about 50 times, which is just crazy.

I think my favourite part of the castle was the view from the top, across the city and rolling hills, out toward Wallace Monument. The Palace was beautifully restored, with ceiling decoration on a scale I’d never seen before. I also visited the Argyll & Sutherland Highlanders Regimental Museum, which is housed on castle grounds. The museum is home to lots of military artefacts and uniforms, which was fascinating to explore.

Down the road from the castle itself is Argyll’s Lodging, a Renaissance townhouse that forms part of the castle experience. I honestly loved it just as much as the castle, with its beautiful wood panelling and wide windows, it was a nice insight into Renaissance life in Scotland.

If you are in Scotland, I would highly recommend a visit to Stirling! It is a pleasant 50 minute train trip from Edinburgh and you won’t leave disappointed!