A Visit to Northern Ireland 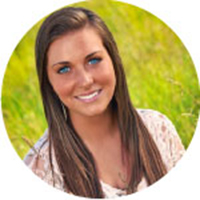 After a week of classes at UCD, it was time for all the internship students to embark on our first trip together. The trip was to the stunning and still divided Northern Ireland. Before arriving in Ireland I had not seen the show Game of Thrones, only heard of it. As I realized the obsession that the other eight people in my program had with the show I knew I had to watch it before going to some of the stops. We set off on the adventure at 6:30 in the morning with the first stop being Belfast.

We drove through the town of Belfast stopping at some historic spots. Our tour guide pointed out to us the cranes where the Titanic was built. This was incredible to see where such a well known piece of history was built. One of the stops was the Peace Wall which separates the neighborhoods in attempts to reduce riots between the two sides of the neighborhood. The wall has mural after mural of different peace keepers from all over the world. These figures range from Barack Obama to Bob Marley to Mahatma Gandhi. After stopping in Belfast for a short time we continued driving north to Ballycastle.

The expression, “pictures don’t do it justice” explains the Ballycastle area perfectly. As we were on our way, extremely tired still from the jetlag and waking up early for the trip, the beauty and wind in our hair immediately woke us all up. This place is absolutely breathtaking. Once we were off the bus we started walking on the path towards the Carrick A Rede bridge which leads form the main land to a small island. On the island you could see out towards the North Channel and all the landscape back on shore. The water was a mix of aqua blue near the shore and deep blue the farther out you look. The beach below was white sand surrounded by cliffs. There were many different types of flowers full of bright colors blooming on the greenish yellow grass.

After the stunning Ballycastle beach, we were on our way to see Giant’s Causeway. This natural landmark was created from volcanic activity. The large black rocks surround the coast and the rocks build up on top of each other to create great grounds for exploring. My favorite part about Giant’s Causeway was the cliff my roommates and I climbed up. Once we made it to the top, the view was unbelievable. The grass on the top of the cliff felt like you were bouncing on a trampoline and we stayed up there just sitting on the grass until it was time to leave again. 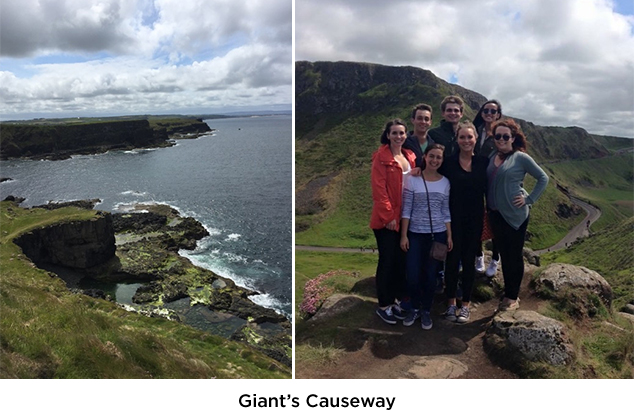 The next stop was to the Ballintoy harbour where scenes from Game of Thrones were shot. The landscape was beaches with white sands and white rocks as well as cliffs over looking the water ahead. The next stop that we went to was a long road lined with trees that twist back and forth all the way up to the top where the leaves are. This road was used to film the dark hedges scenes from Game of Thrones as well. Something that our tour guide told us about is that the map of Game of Thrones is the map of Ireland and England flipped upside down.

We returned from our trip at 8:30 in the evening. All throughout the trip my roommates and I were still in awe at the beauty that we had just seen. We were not told exactly what we would be going to see but I am so glad I did not sleep in that day. Out of al the places I have been whether tropical or areas like the pacific northwest, Ballycastle and Giant’s Causeway will forever be two of the most beautiful places I have ever seen.

Colleen Hess is a student atWashington State University and is blogging from her summer abroad with the University College Dublin Internship program in Dublin, Ireland.