A Burns Night To Celebrate 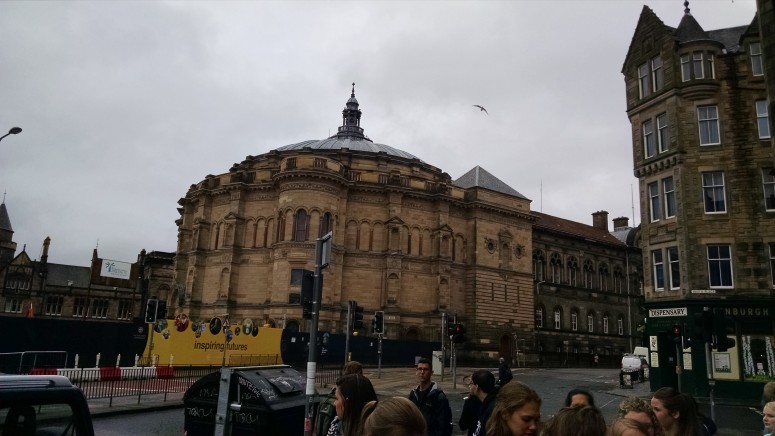 My first few weeks in Edinburgh were a whirlwind of new people, new places. At first, this chapter of introductions was terrifically exciting; at no time in my life had I ever met so many potential new friends in such a short period of time. After two days of meeting fellow students in my study abroad program during orientation, I had half a week of meeting other study abroad students in school-sponsored introductory events; the following week I met new people in my classes, my flat, and a dozen sample activities put on by different clubs and societies.

In the second week of classes, however, the magic started to wear off. Though I felt like I’d met half of Edinburgh, I’d seen almost none of my new “friends” ever again. Though I had a few dozen more Facebook friends, after coming from a tight-knit community, I felt lonelier than when I first arrived. Although stranger upon stranger had learned my name, it still felt like no one really knew me.

I managed to make it through the week, assisted with the helpful distraction of a busy schedule. As I was leaving my last lecture of the week, I saw a poster for a celebration of Burns Night, a holiday commemorating the life and works of the famous Scottish poet Robert Burns. How cool, I thought, to celebrate a Burns Night in Scotland! As I walked home to my flat, I noticed posters advertising ceilidhs--traditional Scottish community dances--and Burns Night Suppers on the doors of most of the bars and restaurants along the way. I couldn’t wait.

My enthusiasm was only dampened by the sudden realization that despite the hundreds of introductions I’d felt I’d made, I had no one with whom I felt I could celebrate. A Burns Night celebration at a bar wasn’t something I’d feel comfortable attending by myself. So even though it looked like all of Scotland would be celebrating, something I would have desperately loved to do, it seemed that I’d be staying home that night. When I got back to my flat, I sat on my bed, and I cried.

Evening rolled around, and I did what I’ve always done in my moments of great need: I called my mom. Through tears, I told her that I missed her, and that I was lonely. As moms tend to do, she comforted me, but she also made a very good point: whether I celebrated Burns Night or not, I’d be by myself, so I might as well be by myself and do something fun. Online, I found an event being put on by the Historical Society that would suit my needs perfectly: a small Burns Night celebration that would present on the poet’s historical significance, serve haggis, and take place in someone’s flat—an environment far less intimidating to me than a bar.

I’d already missed the beginning of the event, but I determinedly speed-walked to the flat where the party would take place. Terrified of the fact that I wouldn’t know anyone, I gathered myself outside of the door where I could hear people laughing and chatting, and, hoping my face wasn’t still red from the crying, I knocked. The door was answered by a girl who welcomed me inside, offered me a seat, and introduced me to some of the other attendees. The small living room was filled with a jovial crowd that sat squished comfortably on the couch and chairs and on the floor in between.

When I introduced myself, for the first time I did so without the desperate intention of trying to make friends. I made great small talk with some strangers whose names I don’t remember any more, who found it awesome that I had found an event and attended by myself. By the time a society member presented on Robert Burns’ influence and addressed the haggis, I felt strangely at peace; though I barely knew anyone around me, I felt somehow included, somehow part of a community.

As I walked back to my flat, I reflected: the members of the Historical Society had been lovely. Strangely, though, I think it was my acceptance of my solitude that had made the night so much better than the previous few days. Without a pressure to become close friends with the people I’d been meeting, I was able to enjoy their temporary company more thoroughly. After deciding to go out by myself, the heavy absence of close friends faded away, and meeting new people became exciting again. And though I may have left just as alone as before, with the help of Robert Burns, I was no longer nearly as lonely.